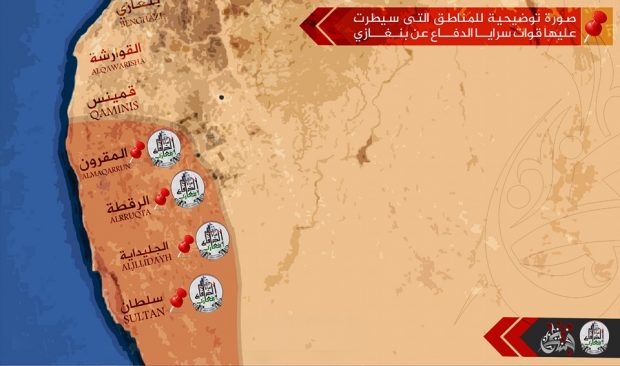 The media wing of the Defense Benghazi Brigades, Boshra Agency, said Saturday the forces of the brigades are advancing toward Benghazi steadily and have seized a number of vehicles from the Dignity Operation forces, who abandoned their weapons and escaped from many areas where the brigades advanced.

The media wing said the Benghazi Defense Brigades controlled this morning and yesterday many areas western Benghazi such as Al-Magroon and others that are 60 to 70 km away from Benghazi, pointing that they seized four tanks and ammunition in that area.

“The brigades carried out a key operation in Al-Ragtah district, where they killed many fighters from Dignity Operation, led by Khalifa Haftar., and seized a number of cars full of foods and equipment in addition to fuel storage truck and an ambulance car.” Boshra Agency added.

The Benghazi Defense Brigades have taken control of many towns and districts to the west of Benghazi and are now advancing to reach more areas such as Slooq, which is located some 40 km west of Benghazi.