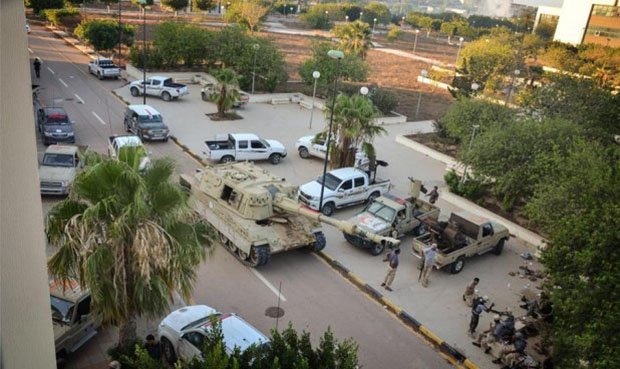 A senior leader in the Libyan forces military operation Al-Bunyan Al-Marsous announced on Friday that the Misurata-led forces appointed by the UN-backed Government of National Accord have kicked off the final battle to eliminate IS radical group from the remaining hideouts in the city of Sirte under the name “Macmadas”, which is the ancient name of Sirte.

The leader also said that the Misurata-led forces are now bombing the last two hideouts for IS in Sirte, Neighbourhoods 1 and 2, saying that liberation of Sirte is about to be announced.

On Wednesday, the Libyan forces of Al-Bunyan Al-Marsous controlled Ouagadougou Conference Halls Complex in Sirte after violent clashes with IS militants.

The media office of the Misurata-led forces announced the capture and said their forces were scouring the whole complex for safety measures.

Ouagadougou Conference Halls Complex has been controlled and made as the headquarters by IS terrorists since 2015 as the militants were using it as their operations building.

Earlier, the Misurata-led forces reported seizing the police academy building and the Al-Giza military zone, as well as the Sirte University buildings in Sirte’s city center from the control of IS militants.

The media spokesman of the Misurata-led forces indicated that their forces killed over 20 of IS radicals as they carried out their fresh attacks on their hideouts in an attempt to take control and eradicate the militants of IS from the whole city.

For: Libyan forces announce final battle dubbed “Macmadas” to eradicate IS from Sirte