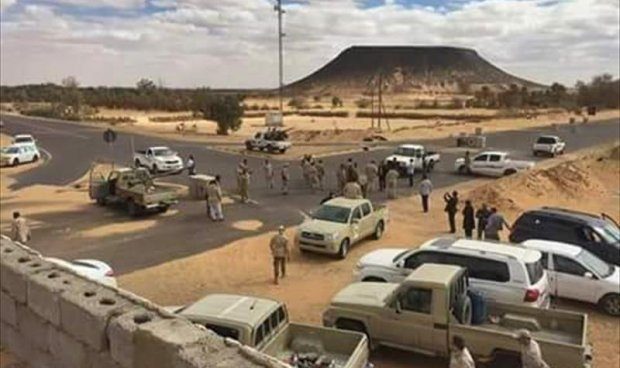 Eastern forces of the Operation Dignity led by Khalifa Haftar said on Wednesday that they had carried out airstrikes and a ground attack on an airbase controlled by the Third Force.

The attack and airstrikes prompted a pledge of retaliation from the Government of National Accord in Tripoli, Reuters reported.

Tamanhent airbase, near the city of Sabha, was the scene of the fight that was led by pro-Operation Dingity armed groups led by infamous military figure, Mohamed Ben Nayel.

“The General Command announced today the launch of military ground operations to liberate Tamanhent base … with the participation of the air force,” Operation Dignity spokesman, Ahmed Al-Mismari was quoted by Reuters as saying.

The leadership of a U.N.-backed Government of National Accord (GNA) in the capital, Tripoli, condemned the move and said it had ordered its forces to help repel the attack.

“We strongly warn against this continuing and unjustified escalation and tampering with the security and stability of the homeland, which opens the door to a civil war,” Reuters reported it as saying in its statement.

According to Reuters, Al-Mismari said ground clashes at Tamanhent, which were confirmed by a resident, were continuing late on Wednesday. It was not immediately clear what damage or casualties had resulted from the fighting.

Also on Wednesday, a group of 16 Operation Dignity fighters wounded in earlier fighting were flown to Italy for medical treatment. Italy evacuated a first group last month, Reuters also added in its report.

For: Clashes erupt for Tamanhent airbase in southern Libya