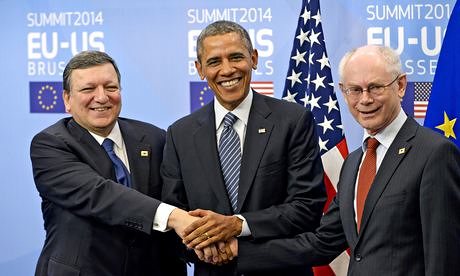 Barack Obama is to meet the four most senior EU national leaders to discuss efforts to stem the flow of migrants from Libya by deploying naval patrols in the country’s waters.

The patrols, the most significant intervention in Libya since the toppling of Muammar Gaddafi in 2011, would be authorised to send refugees back to the country.

Monday’s meeting will also give François Hollande, the French president, and Matteo Renzi, the Italian prime minster, a chance to meet Obama. David Cameron, who met Obama in London, will also fly to Hanover for the talks, which are likely to last about two hours. The German chancellor, Angela Merkel, met Obama for talks on his arrival in Germany.

The G5 meeting will focus on the power vacuum in the Middle East and its impact on mass migration into Europe.

Michael Fallon, the UK defence secretary, said on Saturday that the people smugglers’ business model needed to broken up at source in Libya. Referring to the EU naval mission Operation Sophia, he said: “The operation should move into Libyan territorial waters as soon as possible.”

Vessels that take part in Operation Sophia can currently only operate in international waters, and any refugees picked up cannot be returned to the African coast.

Fallon said HMS Enterprise would extend its operations in the Mediterranean beyond its scheduled departure next month.

The G5 leaders are likely to discuss the extent to which the EU naval mission needs the permission of Fayez al-Sarraj, the Libyan prime minister, to operate in the country’s waters.

Sarraj is struggling to win political support for his fledgling government, and any sign of diminished Libyan sovereignty weakens his ability to extend his internal support.

The UK foreign secretary, Philip Hammond, has also raised the possibility of military support for a Libyan government attempt to drive Islamic State from its stronghold in Sirte.
Advertisement

He said in an interview published on Sunday that he would consider a request to deploy British ground troops in Libya but “if there were ever any question of a British combat role in any form – ground, sea or air – that would go to the House of Commons”.

For: EU leaders and US President to discuss deploying naval patrols off Libyan shores