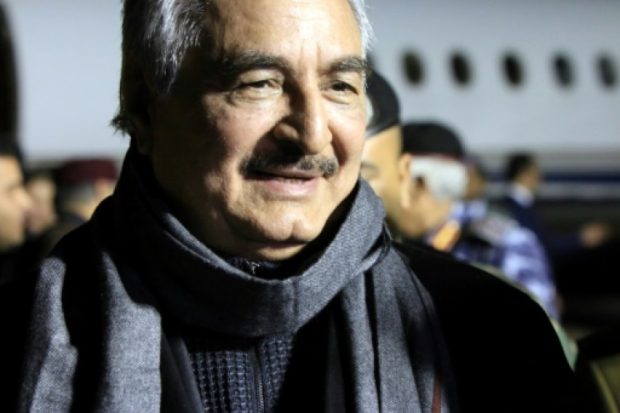 Libyan National Army (LNA) forces may have committed war crimes, including killing and beating civilians, and summarily executing and desecrating bodies of opposition fighters in the eastern city of Benghazi on and around March 18, 2017, Human Rights Watch said today. The army forces allegedly intercepted civilians trying to flee a besieged neighborhood, some accompanied by opposition fighters, and the whereabouts of some civilians are unknown.

A member of the Libyan National Army, the armed forces allied with the Interim Government in al-Bayda, stands next to a hole on a wall during clashes with the Benghazi Revolutionaries Shura Council, an Islamist militia alliance, in Benghazi, Libya.

Khalifa Hiftar, the commander of the LNA forces in eastern Libya, should order a full and transparent investigation into recent alleged crimes by forces under his command, including attacks on civilians, alleged summary executions, and the mutilation and desecration of corpses, and hold those responsible to account.

Relatives, activists, and local journalists told Human Rights Watch by phone that dozens of civilians unexpectedly fled the besieged Ganfouda neighborhood in the eastern city of Benghazi on March 18, 2017, after a nearly two-year stand-off between LNA forces and fighters of the Benghazi Revolutionaries Shura Council (BRSC), a coalition of armed groups opposing the LNA. About half of the civilians, some accompanied by BRSC fighters, fled to al-Sabri and Souq Elhout neighborhoods in downtown Benghazi, which remain under BRSC control. LNA fighters intercepted about seven families after one of their cars broke down and attacked and killed some of them and arrested others, the relatives said.

Human Rights Watch reviewed videos and photos shared by family members of victims, local journalists, and activists that purport to show bodies of BRSC fighters in Benghazi that LNA fighters allegedly desecrated and mutilated during or after the March 18 evacuation of Ganfouda residents.

In a letter sent to Hiftar on March 8, 2017, Human Rights Watch raised concerns for the safety of Ganfouda residents trapped by the fighting and said that LNA leaders should ensure safe passage for civilians and unimpeded delivery of aid. The LNA should also provide detailed information about the screening procedures for civilians and fighters who evacuated the besieged neighborhood, and about the arrest of some of them, Human Rights Watch said in the letter. The LNA has yet to respond.

The LNA announced on March 18, that its forces had evacuated seven families who had remained in buildings no. 12 in the Ganfouda neighborhood, the last bastion of fighting between the LNA and BRSC in the neighborhood. But the LNA has not provided information on the whereabouts of the civilians, whether it has finished screening them, and whether any civilians have been detained or charged with a crime.

On March 20, 2017, the LNA leadership issued a statement decrying incidents in which members of the LNA were caught on video and photos committing serious violations, including desecration, burning, and mutilation of corpses. The statement said that the LNA would arrest those suspected of the violations and bring them before an investigative committee. On March 21, the spokesperson of the army special forces, Saiqa, which is a part of the LNA, issued a statement that appears to defend some of the violations. But a statement later that day by the special forces commander pledged to hold those responsible for the desecration of BRSC fighters’ remains to account.

One video shared with Human Rights Watch appears to show the exhumed remains of the BRSC commander, Jalal Makhzoum, local journalists told Human Rights Watch. In the video, LNA fighters are seen cheering and accompanying the body, tied to a car hood, as they parade through the streets of Benghazi. The BRSC issued a statement announcing Makhzoum’s death on March 18, 2017.

A separate video purportedly shows the body of a BRSC fighter hanging from a concrete barrier at the entry to an army camp as LNA fighters cheer and pose for photographs with the corpse. In another photo, the body of a dead fighter is seen lying on the back of a truck as an unidentified man cuts off the ears and hands. In yet another photo, an unidentified fighter in military fatigues poses for a photograph next to a burning corpse.

Activists and local journalists said that these photos were taken during or after the LNA’s operation to retake the Ganfouda neighborhood on March 18, 2017. Human Rights Watch researchers were unable to verify the date and location of the incidents.

Desecration of the bodies of fighters is prohibited by Libyan and international law. Articles 292 and 293 of the Libyan Penal Code prohibit the desecration of corpses. International humanitarian law obligates all conflict parties to take all possible measures to prevent bodies of the dead from being despoiled.

In an undated video, widely shared over social media, Mahmoud al-Warfalli, a captain in the LNA special forces, is seen shooting three men in the back of the head with a machine gun as they kneel facing a wall with their hands tied behind their backs. Local journalists told Human Rights Watch that the executions took place in Benghazi during the final battle for Ganfouda on or around March 18, 2017.

The LNA special forces spokesman issued a statement on March 21, defending al-Warfalli’s actions as having occurred “within the battlefields.” Activists told Human Rights Watch that the three victims were Tuareg fighters from Ubari who appeared on photos, while alive, apparently in detention by LNA forces.

In another undated video, a man in military fatigues is seen being chased out of a building by a mob of more than a dozen fighters, most dressed in army fatigues. They beat, insult, and throw him to the ground, then line up in a row facing him and several summarily execute him with machine guns. Benghazi activists say that this incident took place in the Qwarsha district of Benghazi. Human Rights Watch was unable to confirm the exact circumstances of this incident.

Relatives of families who held out in Benghazi also shared a video of two sisters, both children, who had been caught by LNA soldiers as they attempted to flee the Ganfouda siege on March 18, 2017. In the video, an LNA fighter interviews both girls, who allege that an LNA fighter beat them and their mother during the evacuation. Relatives of Ganfouda residents believed both girls to be 14 or 15-years-old. Their whereabouts are unknown.

Other relatives shared with Human Rights Watch information and photos of their family members who they said were killed attempting to flee Ganfouda on March 18, 2017. The victims included an unidentified girl, a 75-year-old woman, and a 47-year-old man. Relatives said that LNA forces killed all three as residents attempted to flee. Human Rights Watch was not able to independently verify these claims or exact circumstances of their deaths.

By issuing statements justifying these barbaric acts, the LNA leadership is implicating themselves in what appear to be war crimes, Human Rights Watch said.

“Forces under the Libyan National Army have been committing serious human rights violations for some time, unchecked, and with impunity,” Stork said. “Senior military commanders need to know that they too can be held accountable unless they actively do something to stop these violations.”