Sudanese Islamist leader’s second son killed in strikes on IS in Libya, reports 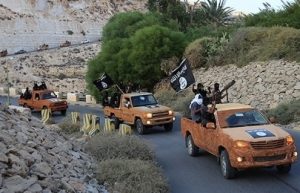 Sudan Tribune – Second son of the late leader of Jamaat Ansar al Sunnah in Sudan, Abu Zaid Mohamed Hamzah, has been killed during an air raid against the Islamic State (ISIS) in Sirte town, 500 kilometres east of the Libyan capital Tripoli.

Mohamed Khalifa Siddig, an expert on Islamic groups told Sudan Tribune Sunday that Mohamed Abu Zaid Mohamed Hamza, 27 and his wife were killed in Sirte, saying his family received the news and will set up a mourning tent at their home in Khartoum’s twin city of Omdurman. He added that some Libyan humanitarian groups have received the three sons of the slain Islamist in order to transfer them to Sudan.

According to Siddig, Mohamed left Sudan to join ISIS ranks in Libya six months after his older brother, Abdul-Ilah travelled to join the group in 2012.

It is noteworthy that Abdul-Ilah was killed in clashes in Sirte in 2015. Also, their third brother Abdel Raouf was sentenced to death for killing an employee from the U.S. Agency for International Development (USAID) in Khartoum on 2008 New Years Eve.

Earlier this month, Al-laithi Youssef, father of Aya Youssef who joined ISIS in December 2015 and was killed in Sirte alongside her husband Ahmed Gasm al-Sid after she delivered a baby daughter, arrived in Khartoum from Libya accompanied by his baby granddaughter. He told reporters that the Sudanese security in coordination with the Red Crescent have orchestrated a complex operation to hand over the baby in Libya, saying they conducted the necessary tests to establish her descent as well as her health and safety.

In 2015, the Ministry of Interior in Khartoum announced that about 70 Sudanese had gone to join the ISIS franchises, both in Libya and Syria.

However, experts on Islamic groups put the total number of the Sudanese fighters within ISIS at 150 Jihadists, saying that 56 of them had traveled to join the extremist organization from countries other than Sudan. They say that 35 of them have been killed in Iraq and Syria while 20 others have died in Libya.

Following the fall of Muammar Gaddafi’s 40-year-rule in 2011, Libya has slid into chaos and has become the most important transit country of illegal migrants to Europe. Also, ISIS presence in Libya has become a source of threat not only to its neighbouring countries but also to Europe.

The views expressed in Op-Ed pieces are those of the author and do not purport to reflect the opinions or views of Libyan Express.
How to submit an Op-Ed: Libyan Express accepts opinion articles on a wide range of topics. Submissions may be sent to oped@libyanexpress.com. Please include ‘Op-Ed’ in the subject line.
ISLibya
Share
Submit a Correction
Sign up for our Newsletter.

For: Sudanese Islamist leader’s second son killed in strikes on IS in Libya, reports