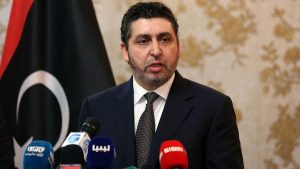 The Prime Minister of the dismissed Salvation Government of the General National Congress, Khalifa Al-Ghweil has said his government is in control of 100% of the capital, Tripoli.

Speaking on Libya HD Channel, Al-Ghweil said that Tripoli is now safe and secure as it has become under the control of his government armed groups.

“The only legitimate power and political governing parties in Libya are the General National Congress and its Salvation Government as well as the Tobruk-based House of Representatives.” Al-Ghweil said on Sunday.

Meanwhile, the UN-brokered High Council of State ordered the GNA-appointed security apparatuses to list those who defected from the Presidential Guard and helped the SG and GNC to seize the Rixos compound in Tripoli.

Therefore, the Head of the Attorney General’s Office, Seddiq Al-Soor, issued a statement Monday ordering the arrest of the Presidential Guard personnel involved in the coup.

“All of the individuals involved in helping the GNC ans SG illegally seize the state institutions and headquarters must be apprehended and brought to justice.” The Attorney General’s statement reads.