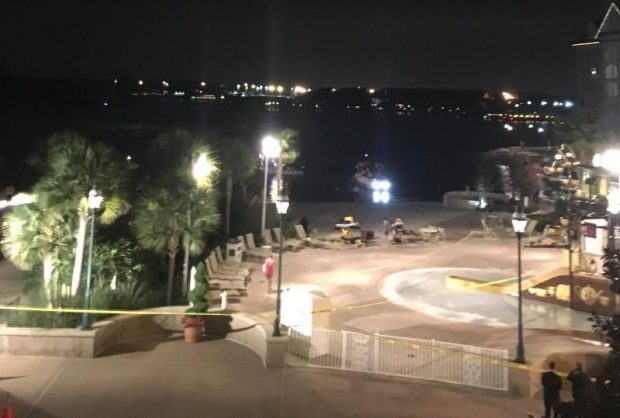 Authorities are searching for a two-year-old boy who search officials say was dragged away from his terrified parents by an alligator at Disney World’s Grand Floridian Resort & Spa in Orlando.

Officials with Orange County Sheriff’s Office said the alligator emerged from the Seven Seas Lagoon just before 9:30 p.m. ET Tuesday and grabbed the boy, defeating the father’s frantic efforts to wrestle his son away.

Deputies searched through the night and continued to comb the waters this morning, aided by sonar equipment and helicopters.

Shortly after daybreak on Wednesday, officials spoke of remaining hopeful, but deflected questions about the boy’s chance of survival.

“Sometimes you get the worst but we are hoping for the best,” said Jeff Williamson of the Orange County Sheriff’s Office.

“They’ve been trying to find him for nine hours right now and there is just — as far as we know, no sign of this young boy.”

The child is from Nebraska, part of a family visiting the Orlando area. His father suffered minor injuries during the rescue attempt, officials said. The mother also tried to rescue the boy. Their names have not been released. A lifeguard was on duty, but did not arrive on the scene in time to help, according to Williamson.