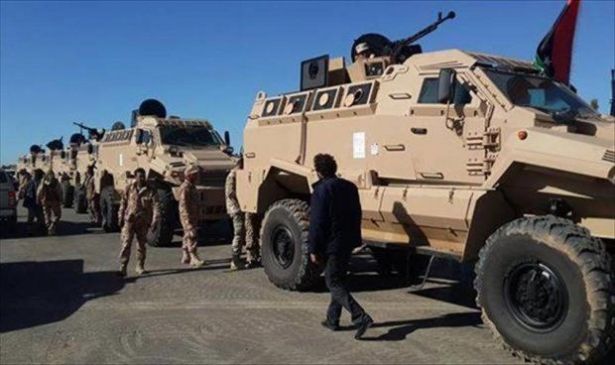 Eastern forces of Khalifa Haftar have carried out fresh airstrikes on Monday targeting the oil terminals they lost control of to the Benghazi Defence Brigades (BDB).

According to sources from Operation Dignity forces, the Haftar-led so-called army officials were seeen mobilizing ground forces as they attempt to win back two of Libya’s largest oil ports – Sidra and Ras Lanuf.

Haftar’s forces lost control of the ports of Sidra and Ras Lanuf on Friday to the rival faction (BDB), and have been unable to dislodge them with airstrikes and ground operations since then.

The escalation risks reversing a recent recovery in Libya’s oil production and reigniting conflict between military factions based in eastern and western Libya that have been fighting on and off for the past three years, Reuters wrote.

Libya’s oil production has recently been around 700,000 barrels per day (bpd), but has dropped to 663,000 bpd after Waha Oil Company cut output by about 35,000 bpd as a precaution due to the unrest, said Jadalla Alaokali, a board member of the National Oil Corporation (NOC), according to Reuters.

“Our warplanes conducted strikes near Ras Lanuf and Sidra oil ports early on Monday,” he said.

Operation Dignity took over the ports of Sidra, Ras Lanuf, Brega and Zueitina in September, allowing the NOC to end a long blockade in the area and more than double national output.

BDB leader, Mustafa al-Sharksi told reporters that the group controlled about 170 km of coast stretching either side of the oil ports.

Operation Dignity spokesman Ahmed Mismari urged citizens in the region to restrict movement and appealed to Al-Bunyan Al-Marsoos forces that captured Sirte, about 180 km east of Sidra, from Islamic State last year, to stay within the coastal city to avoid being hit by air raids.

“There is a very large air and ground mobilization of (LNA) forces to drive back the terrorist gangs in the Oil Crescent,” he said in a statement on Monday.

Since clashes began on Friday, 18 of the LNA’s forces have been killed and 15 wounded, a medical official in the nearby town of Ajdabiya said. Al-Sharksi said two BDB members had been killed and two wounded.

Benghazi Defence Brigades (BDB) forces launched Friday an operation aimed at returning Benghazi IDPs to their houses, saying the offensive only passed by the oil terminals and was not aiming at taking them under control.

Libya’s oil production is more than double the OPEC member’s output last year, but still far under the 1.6 million bpd it was producing before a 2011 uprising.

The views expressed in Op-Ed pieces are those of the author and do not purport to reflect the opinions or views of Libyan Express.
How to submit an Op-Ed: Libyan Express accepts opinion articles on a wide range of topics. Submissions may be sent to oped@libyanexpress.com. Please include ‘Op-Ed’ in the subject line.
Libyaoil crescent
Share
Submit a Correction
Sign up for our Newsletter.