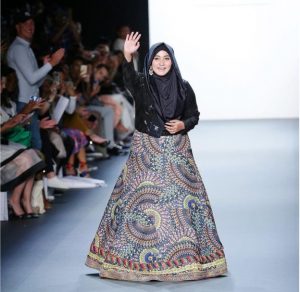 A collection presented at New York Fashion Week is the first time every model walked the event’s runway wearing a hijab.

Muslim designer Anniesa Hasibuan’s show was also one of the first by an Indonesian at the prestigious annual event.

At a time when what Muslim women choose to wear is causing intense debate, many are calling Hasibuan’s move a historic moment in bringing the hijab into the mainstream.

Inspired by her hometown Jakarta, Hasibuan presented trousers, flowing tunic and gowns, in luxurious fabrics and detailed embroidery, all worn with hijabs.

A relative newcomer, 30-year-old Hasibuan received a standing ovation at the end of her show earlier this week.

“Behind the success of a show there is a great team that was strong and sturdy when it was hit by dissent,” she wrote on Instagram. “And we can handle it.”

Melanie Elturk, chief executive of Haute Hijab – a US brand selling hijabs and modest fashion – was at the show.

“I believe fashion is one of the outlets in which we can start that cultural shift in today’s society to normalize hijab in America so as to break down stereotypes and demystify misconceptions,” she wrote on Instagram: “Last night’s show was a huge leap forward in that direction.”

Islamic fashion is definitely having a moment and retailers are trying to cash in, whether its H&M releasing an ad showing a Muslim model in a hijab, Uniqlo partnering with a Muslim designer or Dolce and Gabbana releasing a line of hijabs and abaya’s, aimed at wealthy Muslim consumers.

It has coincided with what is being called the “modesty movement” in fashion.

Many mainstream designers are experimenting with more covered-up clothing (the one-piece bathing suit is back on trend) and Muslim designers are getting creative with Islamic clothing.
Indonesia is seen as an innovator in the region for modern Islamic dress.

“Indonesian fashion has become more diverse and we’ve become more confident in taking our own culture and what we’ve grown up with into our influences,” says Putri Soediono, a Singapore-based designer with Indonesian heritage.

Soediono thinks Hasibuan has proven that Islamic wear can be fashionable, not just the plain black Arab-style burqa that people think of, and that there is talent in Indonesia.

But although some see designers like Hasibuan as modernising the Muslim dress for the modern Muslim, there are conservative groups in Indonesia who say these clothes are “not Islamic enough”.

“The essence of Muslim dress is to wear something decent, to be modest. For women they have to make sure what their wearing doesn’t attract the attention of men,” says Dr Eva Nisa, professor of Islamic Studies at Victoria University, who has been researching Muslim fashion in Indonesia since 2007.

“Some people think what the Muslim fashion designers produce is totally against this kind of religious doctrine [because it can be seen to attract attention].”

She says, in reaction to this, there has been a move towards the jilbab or hijab Shari’a – presented as more appropriate modern Islamic dress – since it is long and loose and doesn’t show a woman’s curves.

For many young Muslim women, the hijab is not a symbol or a statement, but just part of their identity – an identity they are asserting more confidently.

Hasibuan “started her career designing for Muslim women – this is what her consumers want,” says Soediono.

“We just want to design for ourselves, what we like to wear”.