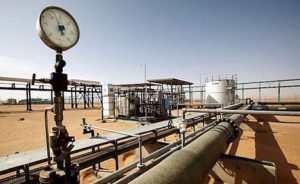 Libya’s National Oil Corporation (NOC) has said they are ready to resume oil exports in contested oil terminals east of the country.

The National Oil Corporation head, Mustafa Sanallah, visited the port of Zueitina on Wednesday during which he promised to assess damage and carry out repairs before exportation begins; although the plan could face political and legal resistance.

The head of Libya’s Labour Union says more than a million barrels are ready to go.

“Because of the militias who were stationed here, Libya in general but the port in particular had been experiencing very difficult conditions. But thank God the blinds have been removed and I have hope for the future of Libya. Today we had shipments from around 103 stations and our situation is good, and we have around one million two-hundred barrels in stock that are ready for export,” the head of Zueitina’s Labour Union, Maree Attiya said.

Khalifa Haftar’s seizure of the ports has been heavily criticised by members of the UN-backed Government of National Accord.

Western powers had criticised the move saying they will prevent exports attempted outside the authority of the Government of National Accord.

The combined capacity of the four ports seized by the rebels is about 770.000 barrels a day.

Es Sider, Ras Lanuf and Zueitina have been under force majeure while Brega has been open but with a reduced output.