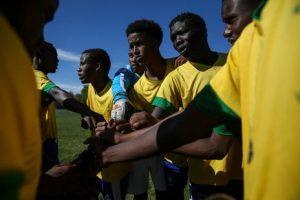 Around the globe, soccer is known as “the beautiful game,” played by more people than any other sport in the world.

And for many, the game is a way to find joy even in the most difficult of circumstances.

Isaack Shire, 19, arrived in Utah from Kenya a decade ago with his parents and 10 siblings. The family previously had been confined to a refugee camp as bloody turmoil engulfed their native country at the start of the 21st century.

A child at the time, Shire spoke little English and knew nothing of American culture or his new home state, but he was happy to be out of harm’s way and in new surroundings despite the severe climactic change and his first experience with snow.

“It was winter, around December-ish,” he recalled. “We didn’t even have coats or jackets — nothing at all. It was a snowy day. I was like, ‘What’s this falling from the sky?’”

The family was placed in housing in the Glendale neighborhood, along many other recent arrivals — many of them refugee families, he said.

Over time, the family settled in Salt Lake City and worked to assimilate into American culture. Shire learned to speak English from watching cartoons on television. “I learned most of my English from ‘Tom and Jerry,'” he said.

Last year, Shire graduated from West High School, and this year he became a U.S. citizen. After graduation, he learned of a soccer program for refugee immigrants and was among the first to join.

While he would love to play professional soccer, Shire said his long-term goal is to pursue a career in sports medicine or management. He is currently enrolled at Salt Lake Community College.

For now, Shire is happy to be involved with something positive like Refugee Soccer.

“It helps me stay out of the streets,” he said, “and it will be a big help to a lot of refugees out there. It will give me direction for the future.”

The program was created by California transplant Adam Miles, who said he wanted to offer refugees an outlet to quench futbol desires and an avenue to pursue their personal career aspirations.

“Playing soccer is a great metaphor for life,” Miles explained. “There is teamwork, hard work. … You have a goal, and you go for it.”

This past weekend and into the next, participants are playing in the final stages of the program’s inaugural tournament. Miles said his hope is to use the games to tell the story of the players and raise awareness of the courageous young men involved in the program.

“(We want to) show the business community the energy, talent and potential that exists in this otherwise overlooked community,” he said.

The goal of the program, Miles said, is to be the vehicle that helps connect participants with opportunities to further their lives and gives them a positive way to engage themselves and avoid the potential pitfalls of “street life.”

“When you are done with soccer, what about enrolling in school or getting a job?” he queried rhetorically. “The idea is to give them a different perspective and to have a plan for (the future) by working with local Utah companies.”

Miles said he would like to develop partnerships with local firms interested in helping refugees who are motivated to provide better lives for themselves and their families.

“We want to give them an opportunity, give them a shot — whether it’s attending a job fair, a corporate event a local company is having, or doing a field trip to see how some of these companies work,” he explained. “That kind of interaction and engagement is invaluable. We want companies to look at the potential that these young people have. It’s a lot bigger than most people realize.”

For: Program makes use of football to help refugees decide on their futures