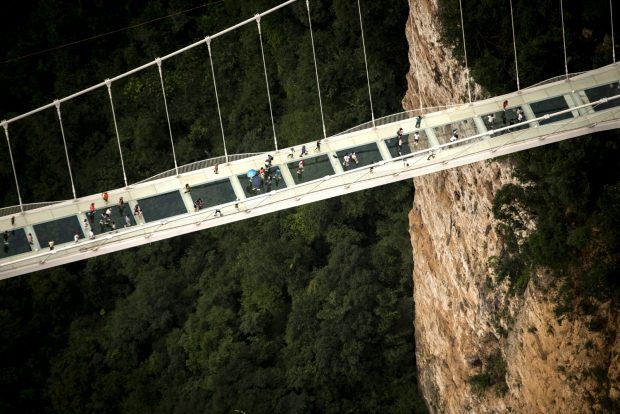 The world’s highest and longest glass bridge at Zhangjiajie Grand Canyon scenic area in Cili county, central China’s Hunan Province, was closed Friday, only 13 days after it opened to public.

The bridge was closed on Friday, three days earlier than the original plan.

The 430-meter-long and 6-meter-wide glass-bottomed skywalk was opened to visitors in the middle of August after several tests.

While only 8,000 visitors were permitted to experience the terrifying bridge each day, visitors had outnumbered the limitation, officials of the scenic area said.

In response to the announcement, some netizens doubted if the closure was owed to the safety reason.

Gao Jingsheng, head of Cili county clarified that the glass bridge had passed the safety tests and checks. He said the temporary closure was for rectifying the deficiencies found during the past 13 days so visitors would have a better experience in the future.

However, many tourists and travel agencies that had booked tickets before the announcement have been left disappointed. Officials have said they “specially handle” the issue but no details have been released so far.

For: World’s highest and longest glass bridge in China shuts for maintenance