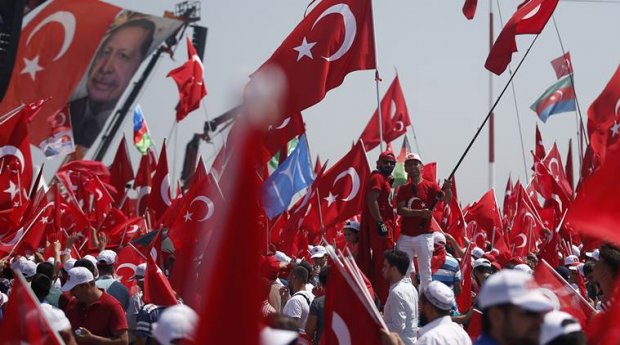 Hundreds of thousands of people have gathered in Turkey’s biggest city, Istanbul, for a rally to protest against last month’s attempted coup.

President Recep Tayyip Erdogan was joined by opposition leaders in addressing the crowd.

In his opening remarks, Mr Erdogan signalled the possible return of the death penalty to Turkey. More than 270 people died in events surrounding the 15 July coup attempt, which triggered a government crackdown.

Thousands of alleged supporters of a US-based Turkish cleric Fethullah Gulen were detained or dismissed from government jobs. Mr Gulen denies any role in fomenting the coup.

Western nations have been critical of the government’s response to the coup. The European Union – which Turkey has applied to join – refuses to accept capital punishment in member states.

The “Democracy and Martyrs’ Rally” is the climax of three weeks of nightly demonstrations by Mr Erdogan’s supporters around the country. Kurdish groups have not been invited, because of alleged links to militants.

Speaking ahead of Mr Erdogan, Prime Minister Binali Yildirim told the rally that Mr Gulen would be brought to Turkey and made to pay the price for the coup attempt.

“Let all of you know, the leader of this terrorist group will come to Turkey and pay for what he did,” Mr Yildirim said.

The leader of the main secularist opposition party, Kemal Kilicdaroglu, told the rally that the coup had opened a “new door of compromise” in the country’s politics.

“There is a new Turkey after July 15,” the Republican People’s Party leader said.

In a rare address to a public rally, the head of Turkey’s armed forces, Hulusi Akar, said “traitors” behind the attempted coup would be punished in the harshest way, and thanked civilians for their role in defeating the uprising.