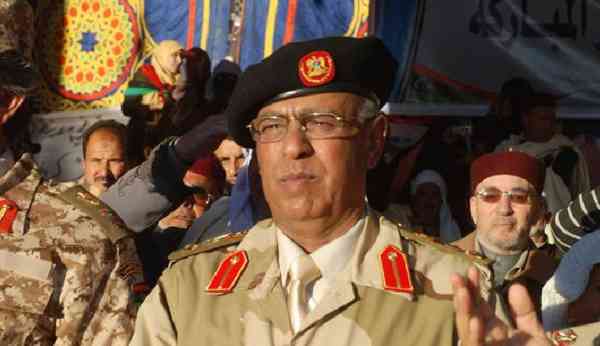 The commander of the Saiqa forces of Operation Dignity in eastern Libya, Idris Abu Khamada, has rejected the resignation filed by the senior commander, Mahmoud Al-Werfalli on Monday.

Abu Khamada said Al-Werfalli is one of the vital pillars of the forces and will not give up on him.

Al-Werfalli is a popular strongman in the military forces of Operation Dignity led by Khalifa Haftar in eastern Libya. He resigned after he had been accused of multiple war crimes and IS-style field executions.

Mahmoud Al-Werfalli, displayed a recorded video resignation on Monday saying he will no longer be part of Al-Saiqa forces of Haftar’s Operation Dignity.

“I am now a civilian citizen who is under the law and has no ties to any military positions whatsoever.” He said in the recorded video, with a number of fighters surrounding him.

He said that the reason behind his resignation is accusations related to the burning of houses and stealing of properties as well as attacking Emergency Police Station in Benghazi, where Captain, Mousa Al-Majbri, was killed.

“I have no ties to those incidents at all.” Al-Werfalli said in the resignation video.

Al-Werfalli is suspect numero uno for many crimes against humanity in eastern Libya, especially in Benghazi, where he was taped on videos digging up tombs of Operation Dignity opponents, or killing some individuals for being suspected of terror as they allege at point blank.

Al-Werfalli was lately seen in a video reciting religious words as he blew the mind of one captive off with his gun at pint blank.

For: Boss of Operation Dignity senior commander rejects his resignation