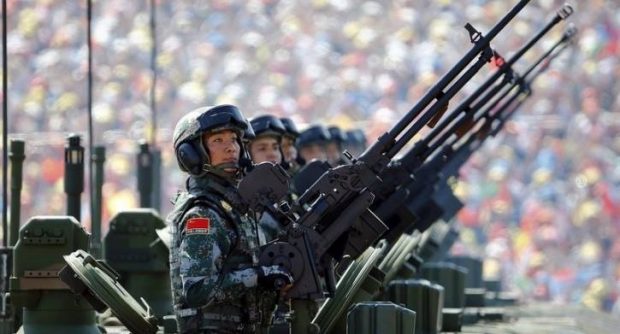 The Chinese People’s Liberation Army (PLA) has weaponised the most dangerous propaganda instrument of all time- badass rhymes – to get more youth to join the world’s largest army.
Battle Declaration

It’s in stark contrast to the previous PLA playlist, which featured orchestral melodies and politely patriotic words, state-run China Daily reported. But ‘Battle Declaration’ is made for a generation raised on a diet of American rap and a Military Industrial complex that’s prominent in bestselling blockbusters.

A PLA publicity expert identified only as Jiao told the daily that “the PLA is no longer the poorly equipped one that they saw from TV dramas, but a powerful force as modernised as the United States military”. PLA has 2.3 million personnel, and it has the world’s second highest defence budget of over USD 146 billion, only second to that of America’s USD 534 billion.

The video shows soldiers training and exercising, fighter jets conducting dogfights and missiles being fired, among other military activities. Almost all of the PLA’s best weaponry is displayed in the video, including the first aircraft carrier Liaoning, J-11 fighter jet, Type-99A tank and DF-11 ballistic missile.

Satellites and spacecraft also appear in the video, which indicates the PLA has placed unprecedented importance on its space force, Jiao said, adding that the hip-hop video could be a big help in recruiting young people, specially educated young people to operate its modern machinery, Jiao said.

Ironically PLA scouts for new recruitment as it braces to shed three lakh personnel starting from next year to make it a leaner force. Also, an increasing number of media reports say some young people spare no efforts to avoid military service.
Here are the lyrics in English, as per medis reports

There is always a mission on your mind.

There is always an enemy in your view

There is always responsibility on your shoulders

There is always passion in your heart

War could erupt any time

Even if a bullet passes through my chest

My mission remains carved in my heart

Look to the bravest general of them all

Walk from here toward the site of combat

Even if a bullet passes through my chest

My mission remains carved in my heart

From the center to the borders

The country honors our guardianship

The rising head of a loyal patriot

If I don’t bear the burden, who else will?