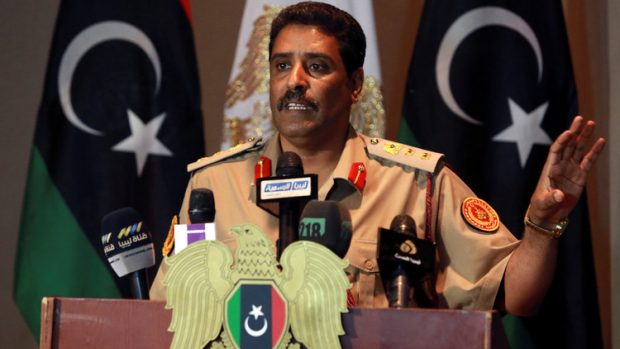 The Spokesman of Dignity Operation, Ahmed Al-Mismari, said their fighter aircraft will keep on bombing Ganfudah district in western Benghazi as long as the sound of gunshots keep coming from there.

Amnesty International had previously issued a statement urging the warring parties in Benghazi to abide by the humanitarian laws and allow the people trapped inside Ganfudah district to be reached by unconditional humanitarian assistance.

The statement also called on the warring parties to allow the civilians to leave the district through safe passages and stop using them as human shields.

The statement, which was issued last Friday, also said that Amnesty International is worried about hundreds of families trapped inside Ganfudah in Benghazi without the least humanitarian assistance.

Media sources reported that Dignity Operation forces, led by Khalifa Haftar, and backed up by foreign warplanes, carried out at least two airstrikes on residential areas inside the besieged district in Benghazi, Gnafudah.

Boshra News Agency, said nine civilians were killed in the airstrikes, which it said were conducted by foreign aircraft, including two families: a mother and her two children, while the father was only injured as well as another mohter and her three children.