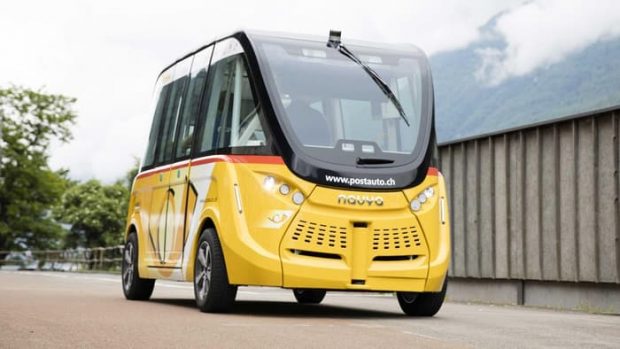 Switzerland has joined a growing number of places around the world exploring the potential of electric autonomous buses, with a pair of driverless shuttles now ferrying passengers around the city of Sion as part of a two-year trial.

Other autonomous buses being tested out across the globe include the EZ10 in California and Singapore, the Navia also in Singapore, and the IBM-powered Olli in Washington DC that can even talk to its passengers en route.

Much like these projects, Switzerland’s buses will take to public roads with local regulators eying a wider deployment of low-carbon, autonomous mass transport. The vehicles will be operated by Switzerland’s leading public bus operator, PostBus, and will navigate Sion’s city streets using software developed by startup BestMile, which spin out of the Swiss Federal Institute of Technology in Lausanne (EPFL).

The buses have been fitted with air conditioning, a backup battery, an access ramp for the disabled and are capable of carrying 11 passengers at a time, who will ride free of charge. The two vehicles will follow a route along the edge of the city of 33,000 residents and pass through pedestrian areas, but they won’t exactly be humming along, traveling only at a top speed of 20 km/h (12 mph).

An attendant will go along for the ride in the interests of safety, but the buses will be controlled remotely by an operator using BestMile’s autonomous driving software. Researchers from the EPFL’s Urban Transport Systems Laboratory are collaborating on the two-year project, with the aim of building a system that manages fleets of autonomous vehicles.

This will involve developing algorithms that enable the buses to communicate with one another and other vehicles on the road, along with accomodating the needs of passengers through on-demand services, such as booking rides in advance and adjusting for flexible routes. Eventually, the researchers say the technology will need to be able to handle these tasks in real time.

For: Driverless buses hit the road in Switzerland