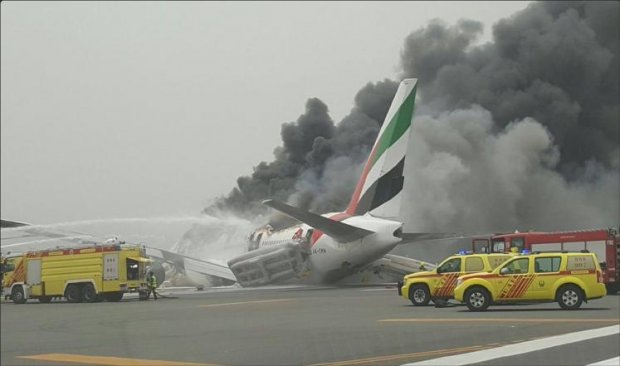 An Emirates plane has crash-landed at Dubai International Airport. All 300 people on board were able to escape from the burning aircraft. The plane appeared to have landed on its belly, and images showed thick black smoke rising into the sky. The cause of the incident is not known.

The Boeing 777 was flying to Dubai from the southern Indian state of Kerala.The Dubai government media office said all passengers were evacuated safely and no injuries have been reported.

Emirates airline said there were 282 passengers and 18 crew on board from 20 nationalities, most of them Indian, with 24 Britons and 11 people from the United Arab Emirates.

“Our main priority now is the safety and well-being of all involved,” the airline said on Twitter. Passengers on planes landing at the airport at the time looked on in horror.

“I couldn’t believe my eyes. I was absolutely horrified,”, Sarah-Louise Sherwood told the BBC.

“The slides came out but they were blowing all over the place. People managed to escape – from what I saw – before there was a big explosion, with flames everywhere. We had taxied and stopped right next to where it was happening and people in my plane were just saying ‘oh my god’ and ‘get us off this plane’,” she said.

For: Emirates airplane catches fire while landing in Dubai