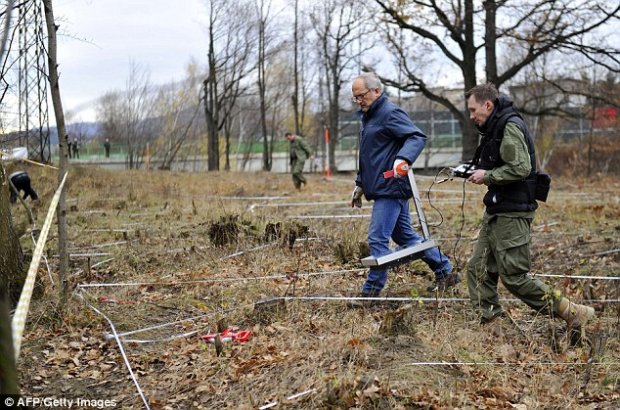 Treasure hunters have begun digging at a site in south-western Poland where they believe a Nazi train, laden with stolen gems and arms, is hidden. Experts say there is no evidence that the legendary train exists there.

The explorers – led by Piotr Koper from Poland and Andreas Richter from Germany – said ground-penetrating radar results were “very promising”.

They think the train was hidden in a tunnel in 1945. The dig, near the city of Walbrzych, may take up to 10 days.

Since World War Two there have been rumours that a train full of loot and guns disappeared into a complex of tunnels – part of a secret military project which the Nazis never finished. At the time the Soviet Red Army was advancing into the heart of Nazi Germany.

The Nazis had many miles of tunnels constructed near Walbrzych during the war.

In December Prof Janusz Madej from Krakow’s AGH University of Science and Technology said its geological survey of the site had found no evidence of a train.

“There may be a tunnel. There is no train,” he told a press conference in Walbrzych.

A spokesman for the treasure-hunting team, Andrzej Gaik, told reporters on Tuesday: “We have to find a railway track, probably the entrance to a railway tunnel and, if the tunnel exists, there should be a train there.”

Local folklore said an armoured train had been carrying gold from what is now the Polish city of Wroclaw as the Soviet army closed in.

It was said to have gone missing near Ksiaz castle, 3km (two miles) from Walbrzych.

For: Explorers started digging in Poland’s site for a missed Nazi full-of-gems train