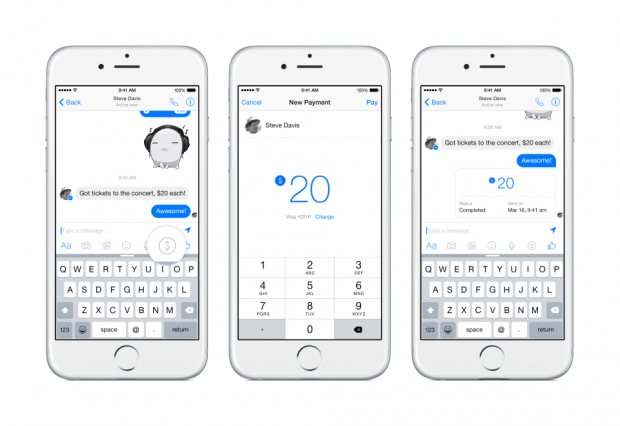 Facebook has revealed it is testing a new Messenger feature that will allow the app to remind you to pay friends back. Facebook Messenger can already be used to send payments. It can now detect when you’ve loaned money from friends to make you repay.

The feature is called chat assist and is available to U.S. users of Messenger on iOS and Android from today. The company told TechCrunch that it will gain a wider rollout later on if the initial response from users is positive.

Chat Assist intelligently scans the content of your messages to identify contacts who you owe money to. If you’re sent a message such as “You owe me $10,” Messenger will automatically display a “Pay $10” button below it. Tapping the button will immediately send $10 to the contact using Messenger’s existing payments infrastructure.

Facebook unveiled friend-to-friend payments in March 2015. It allows you to connect supporting debit cards to your Facebook account and send payments to friends from within Messenger communications. The service is optional and works without any user assistance. Chat assist expands on the payments system to make it even more user-friendly, building in an assistant element that removes another reason to leave the Messenger app.

Chat assist is Facebook’s latest machine learning-powered addition to Messenger. The company has recently launched a bot platform for the app and unveiled M, a personal assistant you can talk to from your existing Messenger chats. Facebook is transforming Messenger into a centralised location for all your online communication, including with businesses and robots.

Alongside chat assist, Facebook also launched support for Messenger polls today. Again available only in the U.S. for now, polls allow participants in a group chat to pick an option from a set of possible values. Messenger displays the poll inline in the chat thread, showing how many people have voted for each option and which is the most popular overall.

The feature is almost identical to Facebook’s existing Polls support in Events and Groups. It works in a similar way to Twitter polls, enabling you to quickly establish opinion on an issue without people creating their own responses. U.S. Messenger users can try it out today by opening the app and clicking the new “Polls” button displayed in group chats.

Chat assist and Polls are Facebook’s latest attempt to keep people engaged on Messenger. It is trying to create a platform which people don’t need to leave, integrating polls and payments to avoid people heading to rival services to hand a friend some money or quickly get responses from a group. Messenger now has over one billion users and is still growing, leading Facebook to continue to expand its capabilities.

For: Facebook unveils Pay Friends Back feature in Messenger