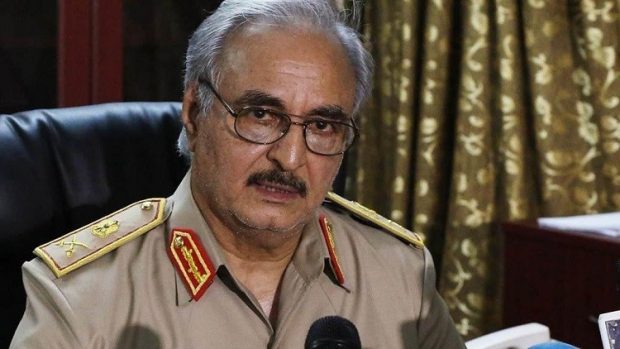 Leader of Dignity Operation, Khalifa Haftar, who leads forces loyal to the Tobruk-based House of Representatives, has reached out to Russia asking it to end its arms embargo on Libya.

Sputnik reported a Russian diplomatic source on Wednesday as saying that Khalifa Haftar, who recently took control of Libya’s key oil terminals and kicked out the pro-Government of National Accord (GNA) Petroleum Facilities Guard (PFG) from the site, asked Russia to begin supplying weapons and military equipment to eastern Libyan forces.

“Dignity Operation commander Haftar delivered his request to both the Russian President, Vladimir Putin, and the Russian Defense Minister, Sergei Shoigu, via his special representative, Abdelbaset Badri, who is currently serving as Libya’s Ambassador to Saudi Arabia.” The Russian news agency added.

The source also added that Haftar’s message was simply a request for the Russians to send small arms, and military equipment, including plane to what he describes as Libyan army forces (his eastern Dignity Operation forces).

“Also, Haftar’s representative, Badri, asked Moscow to start an anti-Islamist military operation in Libya that is similar to the one in Syria,” the source told the newspaper.

For: Haftar asks Russia to lift arms embargo and to apply the Syrian scenario in Libya