IOM issues its September report on situation of migrants in Libya 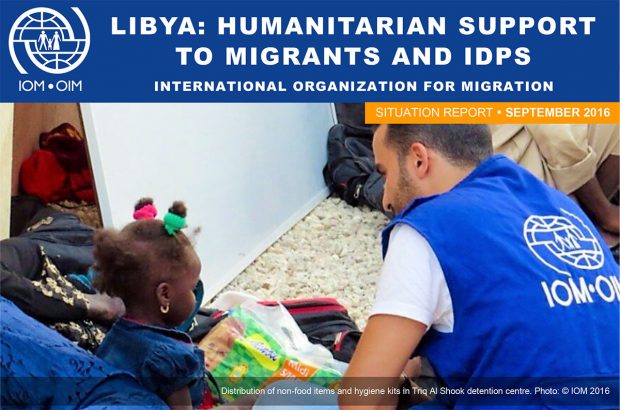 Following the no-confidence vote from the House of Representatives (HoR), based in the north-eastern city of Tobruk, the UN-backed Government of National Accord led by Fayez al-Sarraj continues to face difficulty in mobilising support. Serraj has called for national reconciliation and announced that consultations have been launched to form a new cabinet in the coming weeks.

On an economic note, Libya has exported its first oil with a tanker leaving Libyan port Ras Lanuf for Italy in mid-September, it is the first crude oil export cargo from the terminal since late 2014, boosting hopes of reviving Libya’s oil output.

In the meantime, military operations against the Islamic State in Sirte continues. The operations by Libyan and American forc es have been depicted as the final push to liberate the area and has spurred speculations about the group’s next move, some arguing the extremist group may try moving south in the country. The group’s area is currently estimated to be limited to one neighbourhood.

Migrants continue to travel on the Central Mediterranean Route, in September the Libyan Coast Guard rescued 1,948 migrants. To better meet the needs of these migrants, IOM is currently making the necessary preparations for the instalment of 3 medical centres at the disembarkation points, which will provide migrants with the necessary medical support upon rescue operations by the Libyan coast guard. In addition, IOM is supporting the coastguard with direct assistance for the rescued migrants. So far 12,582 migrants have been rescued by the Libyan Coast Guard this year.

For: IOM issues its September report on situation of migrants in Libya