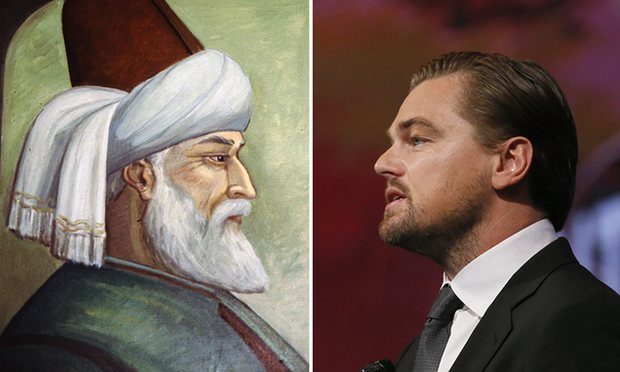 Hollywood will soon roll out a biopic about 13th-century Persian poet and scholar Jalaluddin Muhammad Balkhi. Oscar-winning screenwriter David Franzoni, who wrote the script for the 2000 blockbuster “Gladiator,” will be working on the film in collaboration with Turkey.

The announcement of a Hollywood biopic about 13th-century Persian poet Rumi with Leonardo DiCaprio in the lead role has sparked an outcry among Iranians.
Author Zahra Alipour Posted June 27, 2016

Known in Iran as Molana (Our Master) or Molavi (My Master) and in the West as Rumi, Balkhi was born in the city of Balkh in present-day Afghanistan, which then was part of the Persianate Khwarezmian Empire.

The announcement of the upcoming biopic has already stirred controversy. Talk of Leonardo DiCaprio being cast as the Persian poet has sparked an outcry centered on charges of “whitewashing” — especially in Iran, Turkey and Afghanistan, all of which claim Rumi as their national poet.

Iranian film critic and writer Ahmad Talebinejad told Al-Monitor, “The United States and the West’s fascination with Molana, or as they call him ‘Rumi,’ started just a few years ago. He is not only appealing in the world of cinema, but also in music and poetry. This is perhaps because of his all-encompassing view of the world. I mean, if we look at his interpretation of life and existence, we realize that he saw the entire world as his home and hence he does not belong to only one group of people.”

Talebinejad referred to the book “Rumi: The Fire of Love” by acclaimed writer Nahal Tajadod, which tells the story of Rumi’s life, and said, “It’s not clear how much of this story is rooted in reality. However, it portrays Molana as a unique individual. This is exactly how the public sees him, and in this context, perhaps the people in Hollywood also have a right to make a film about him.”