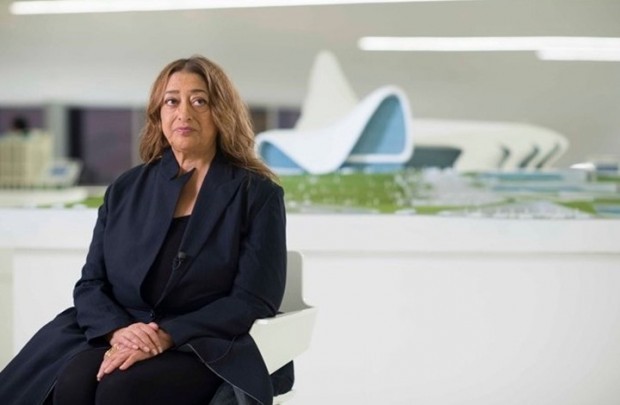 Iraqi-born, this year she was the first woman to receive the Royal Institute of British Architects (Riba) Gold Medal in recognition of her work.

She died following a heart attack on Thursday in a Miami hospital, where she was being treated for bronchitis.

Her designs have been commissioned around the world, including Hong Kong, Germany and Azerbaijan.

Collecting her Gold Medal in February, Dame Zaha said she was proud to have been the first woman to win in her own right.

“We now see more established female architects all the time,” she said.

“That doesn’t mean it’s easy. Sometimes the challenges are immense. There has been tremendous change over recent years and we will continue this progress.”

Dame Zaha’s other creations include the Serpentine Sackler Gallery in London, the Riverside Museum at Glasgow’s Museum of Transport, and Guangzhou Opera House in China.

She twice won the Riba Stirling Prize, the UK’s most prestigious architecture award. In 2010 she won for the Maxxi Museum in Rome, winning again in 2011 for the Evelyn Grace Academy in Brixton.

Born in Baghad, she studied maths at the American University of Beirut – where she later designed a building on campus which was completed in 2014 – before embarking on her career at the Architectural Association in London.

In 1979 she set up her own company – Zaha Hadid Architects.

Her first major commission to be constructed was the Vitra Fire Station in Weil am Rhein in Germany.

The striking London Acquatics Centre in Stratford, which resembles a wave, features two 50-metre pools and a diving pool. After being used for the Olympics and Paralympics it was opened to the public in 2014.

“I love the London Aquatics Centre because it’s near where I live,” Dame Zaha said at the time.

London Mayor Boris Johnson wrote on Twitter: “So sad to hear of death of Zaha Hadid, she was an inspiration and her legacy lives on in wonderful buildings in Stratford and around the world.”

She designed one of the stadiums that will take centre stage at the Qatar World Cup in 2022.

Last year, however, the Japanese government scrapped plans to build the futuristic-looking stadium she designed for the 2020 Olympics in Tokyo, opting instead for a scaled-down, less costly design.

Riba president Jane Duncan said: “This is absolutely terrible news. Dame Zaha Hadid was an inspirational woman, and the kind of architect one can only dream of being.

“Visionary and highly experimental, her legacy despite her young age, is formidable. She leaves behind a body of work from buildings to furniture, footwear and cars, that delight and astound people all around the world. The world of architecture has lost a star today.”