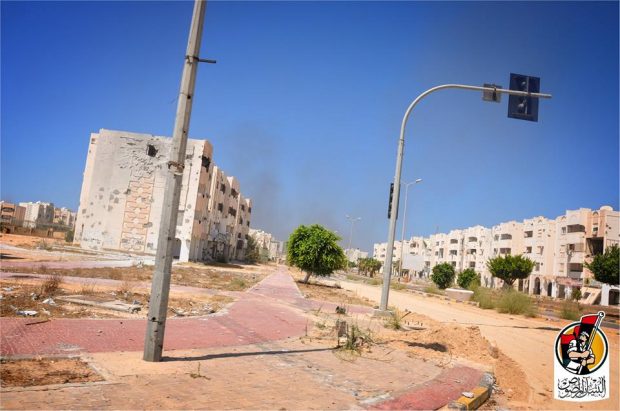 The media office of Al-Bunyan Al-Marsous operation of the UN-brokered Government of National Accord said its Misurata-led forces had advanced into the last two spots of IS militants in Sirte in Neighbourhoods 1 and 3.

The media office added on its Facebook page that the forces captured the interior security building, Al-Naga neighbourhood, and Al-Shabiya area.

the spokesman of the operation, Muhammad Al-Ghasri also said that IS terrorists only control Neighbourhood 3 and Al-Jizah buildings as they also captured most areas in Neighbourhood 1 like Sahari Bank, Al-Hisba Court of IS, Dubai St., Al-Ribat mosque, where an IS militant from Bahrain called Turki Al-Banali Al-Bahraini used to preach.

“IS militants have fortified the last hideouts with mines on the ground and snipers on rooftops hindering any advance on foot and making it a must for shelling by artillery and by airstrikes.” Indicated Al-Ghasri.

Misurata Central Hospital announced Sunday that it received over 63 injured fighters from the Misurata-led forces due to the ongoing clashes in Sirte.

For: IS suffers major loss as Libyan forces advance more into its last hideouts