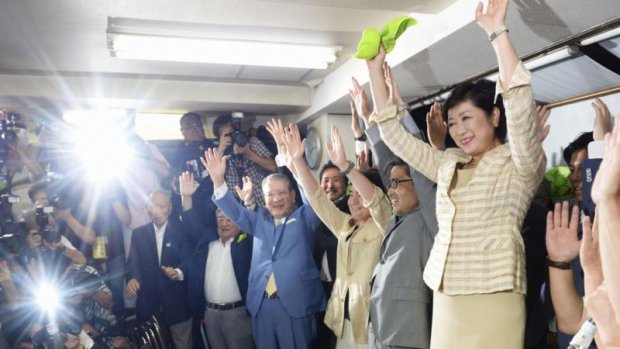 Less than one week after Americans nominated the first woman to run for president of the United States, voters in Tokyo chose Yuriko Koide, 64, to become the first female governor of the world’s largest city.

The veteran member of parliament easily dispatched her closest rival, Hiroya Masuda, who had the official endorsement of the governing Liberal Democratic Party (LDP) in Sunday’s vote. Her decision to “fall off the cliff” and challenge the LDP-endorsed candidate paid off handsomely.

Koike was probably the better-known candidate in the election, having served in two cabinets, including minister of defense – the first woman to hold that post. She is also a well-known columnist in Japanese and English language publications.

Masuda’s main claim was the experience he gained serving several terms as governor of Iwate prefecture, a fairly remote and rural area of northern Honshu far from Tokyo.

Although formally behind Masuda’s candidacy, Prime Minister Shinzo Abe did not put his own prestige on the line in this election or suffer any political repercussions. It was viewed mainly as a Tokyo affair.

The election must be seen as another blow to the floundering opposition, as third-place finisher Shuntaro Torigoe fell far behind. The Democratic Party and Japanese communists supported the former broadcast anchorman.

Koike was educated at Cairo University and, unusually for a Japanese leader, is fluent in Arabic and has worked as a translator.

She takes the helm of a city that has seen her two immediate predecessors as governor resign because of financial irregularities. The city’s plans to host the 2020 Olympic Games have had their troubles too, including replacing the architect for the main stadium.

Koide said she was too busy getting on with her new job to attend the opening of the Rio Olympic Games, although she will probably be obliged to attend the closing as the Olympic flag is handed over. Koike has one other claim to fame.

As environment minister she championed the fashion of Japanese public officials and businessmen shucking their neckties in the summer to cut down on air conditioning. In Japan they call it “Cool Biz.”