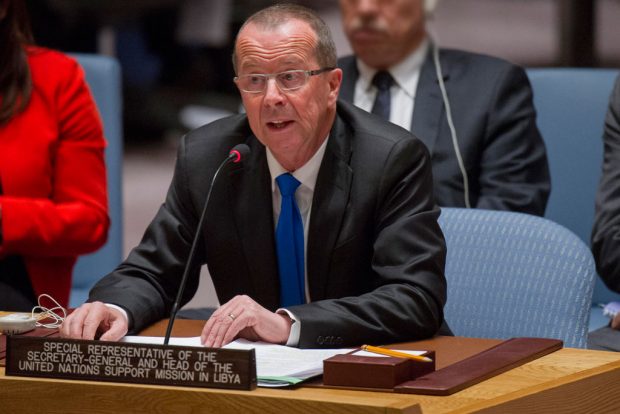 Reuters – There is emerging consensus in Libya and the international community to support a change to the composition of the U.N.-backed government’s leadership, the top United Nations official in Libya said on Wednesday.

Western states say the U.N.-backed Government of National Accord (GNA) provides the best chance of reversing Libya’s slide into anarchy and warfare. However, the GNA has largely failed to exert its authority over a country that slid into lawlessness after the 2011 uprising that toppled Muammar Gaddafi.

“There is I must say a growing consensus to adapt the composition of the Presidency Council,” Martin Kobler, the special representative of the U.N. Secretary-General in Libya, told Reuters in an interview.

“We opened the way for a limited amendment to the Libyan political agreement but it must be a Libyan-owned and a Libyan-steered process,” said Kobler, who spoke after giving a Security Council briefing at U.N. headquarters in New York.

The GNA’s leadership, the Presidential Council, is made up of nine members who are meant to represent different geographical regions and political currents within Libya.

The Council has been bitterly divided, with two of its number mostly boycotting proceedings, and different members regularly issuing contradictory statements.

Khalifa Haftar, a prominent commander in eastern Libya who harbors national ambitions and once fought beside long-time leader Muammar Gaddafi, is a figurehead for factions in the country’s east. He has shunned the GNA.

“The single most important topic is the construction of a Libyan united army with a clear chain of command, where general Haftar must have a role,” Kobler said.

He said had met Haftar once but has not had another meeting since then. Haftar has had renewed engagement with Russia at a time when the GNA is in crisis.

“I just came now from Moscow … the Russians have a close relation(ship) to Haftar, so there is no lack of communication,” Kobler said.

Kobler said he has not yet had contact with the new U.S. administration.

“If the Trump administration asks for a meeting I would love to meet (them). But I take it that it takes some time in order to get organized after the change of government.”

Kobler said the U.N. was actively working on reopening its office in Tripoli, following similar moves from the Italian and Turkish embassies there last month.

“We are reinforcing the place, and building,” said Kobler, adding the return will be “in the foreseeable future.”