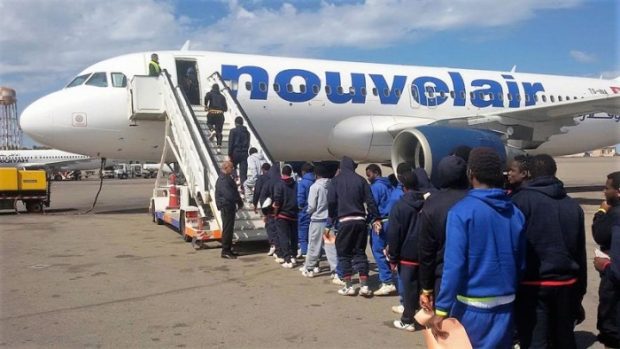 Gambia`s Interior Minister Mai Ahmad Fatty, Friday announced that 140 Gambians have been voluntarily repatriated from Libya to Banjul, following an appeal they made to the government.

According to Fatty, more than 1000 youthful Gambians enroute to Europe through the Mediterranean Sea are currently stranded in Libya.

Fatty spoke to journalists on Friday at the Kairaba Beach Hotel.

“We have been negotiating with the International Organization for Migration (IOM), as we have received concerns on the request of our citizens in Libya who embarked on irregular migration, which we call the ‘back way’.

“Many of them want to come home. They are victims of crime and they have no money, no food, and no proper shelter and their living condition is abominable. The responsibility of the government is to look after its citizens, whether they are at home or abroad.

“When I got into the picture, I accelerated negotiations with IOM in order to repatriate those Gambians who are stranded in Libya voluntarily.

“We have registered 460 Gambians in Libya who are living in abominable conditions and would like to return home; they can no longer proceed. Among these 460, I am glad to report that 140 people have returned around 1 am this morning([Friday 10 March 2017) to Banjul.”

Fatty expressed optimism that the 460 Gambians, who registered to voluntarily return home will all be repatriated, as the government is working in partnership with IOM.

The 140 Gambians were all screened by joint security forces personnel, including the immigration, the police and the intelligence services at Banjul International Airport.

Minister Fatty added that in partnership with the IOM, each of the returnees was given (D2,600) thousand six hundred dalasis to facilitate their transportation back to their homes.

The views expressed in Op-Ed pieces are those of the author and do not purport to reflect the opinions or views of Libyan Express.
How to submit an Op-Ed: Libyan Express accepts opinion articles on a wide range of topics. Submissions may be sent to oped@libyanexpress.com. Please include ‘Op-Ed’ in the subject line.
GambiaLibyaMigrants
Share
Submit a Correction
Sign up for our Newsletter.

For: Libya repatriates 140 Gambians in coordination with IOM