Libya, Venezuela suspended from voting in the UN General Assembly once again 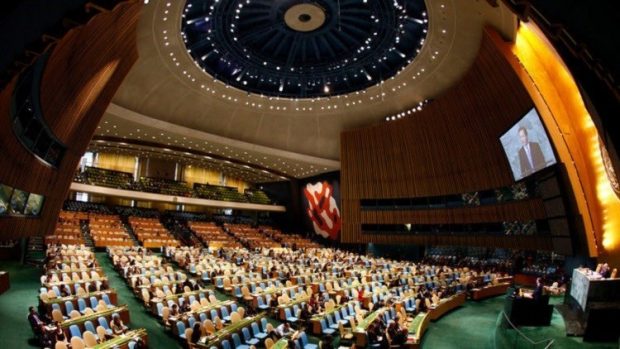 AP – Venezuela and Libya have been suspended from voting in the U.N. General Assembly for the second time in two years because of millions of dollars in unpaid dues to the world body.

The Assembly decided this week that the two oil producers and four other countries would lose their votes in the 2016-2017 session because they’re over two years behind on dues, which vary according to factors including national income.

As of January, the most recent figures available, Venezuela would have to make a minimum $24 million payment to get under the two-year threshold and get its voting rights restored. Libya’s minimum payment is $6.5 million.

The sums are far smaller, ranging from $265,000 to less than $12,000, for the other countries: Papua New Guinea, Sudan, Vanuatu and Cabo Verde, formerly called Cape Verde.

None of the nations’ U.N. missions immediately responded to inquiries Friday.

Asked Friday about the no-vote list, Stephane Dujarric, a spokesman for Secretary-General Antonio Guterres, noted that the same U.N. charter provision that revokes voting rights for countries two years in arrears also allows for exceptions if the debts are due to events beyond their control.

“That’s a decision for the member states,” he said. The General Assembly voted last fall to give such exceptions to Comoros, Guinea-Bissau, Sao Tome and Principe, and Somalia.

Venezuela temporarily lost its Assembly vote last year at an awkward time, shortly before its turn as president of the separate, more powerful Security Council. Venezuela’s two-year term on the council has since ended. Facing a $3 million minimum payment at the time, the nation quickly settled up, with its ambassador saying the delay was an administrative issue and not a reflection of the country’s economic problems.

Venezuela’s oil-dependent economy has spiraled into crisis since world oil prices began a plunge in 2014. Venezuelans are grappling with triple-digit inflation and widespread food shortages.

Libya’s economy has suffered greatly since the country was hurled into turmoil by the 2011 uprising that toppled and killed longtime dictator Moammar Gadhafi. Violent militia activity has taken a major toll on oil production in the last few years, though output has been rising of late.

The views expressed in Op-Ed pieces are those of the author and do not purport to reflect the opinions or views of Libyan Express.
How to submit an Op-Ed: Libyan Express accepts opinion articles on a wide range of topics. Submissions may be sent to oped@libyanexpress.com. Please include ‘Op-Ed’ in the subject line.
LibyaUN
Share
Submit a Correction
Sign up for our Newsletter.

For: Libya, Venezuela suspended from voting in the UN General Assembly once again