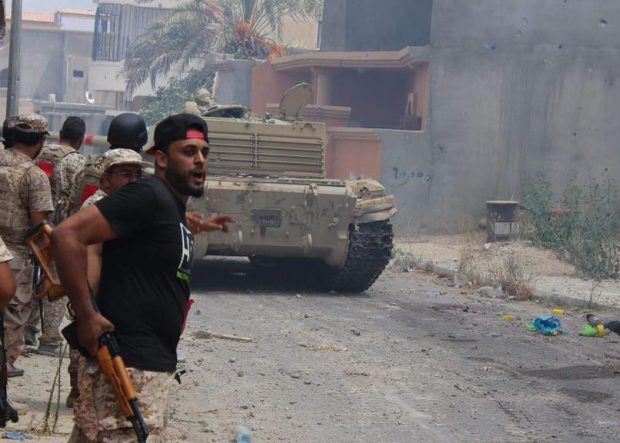 The media office of Al-Bunyan Al-Marsoos operation of the Government of National Accord, led by forces from Misurata city, announced Sunday capturing over 70% of neighbourhood 1 after fierce and close clashes with IS militants, who fought like they got nothing to lose, yet at last were cornered in less than 2 km space in the neighbourhood.

The media office added that the Misurata-led forces advanced into neighbourhood 3 backed with the US warplanes and military engineering units, which started with defusing landmines and explosives planted by IS terrorists, adding that after violent clashes, they managed to control 50% of the neighbourhood, killing a considerable number of IS radicals.

“We also captured the infamous mosque (qurtoba) which was controlled by IS after killing its breacher, Khalid Al-Firjani and then renamed it as (Abu Musab Al-Zarqawi) in 2015 this month.” It added on its Facebook page.

IS militants tried to thwart the forces’ advance by 12 booby-trapped cars, but the Libyan forces of Al-Bunyan Al-Marsous exploded them from afar with the help of the US airstrikes.

For: Libyan forces to announce liberation of Sirte after retaking over 70% of neighbourhoods 1&3