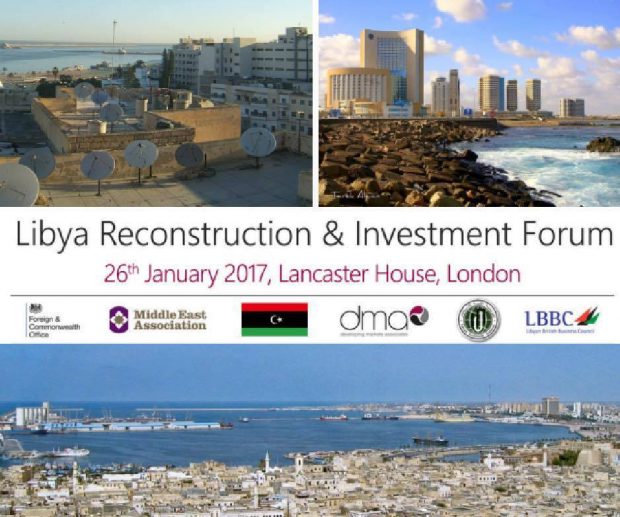 The Libya Reconstruction and Investment Forum – hosted by the Middle East Association (MEA) and Developing Markets Associates (DMA) on behalf of The Libyan Government of National Accord (GNA) – will take place in London’s Lancaster House on Thursday 26th January 2017.

According to the British Embassy in Libya, delegates from across Libya and the United Kingdom will discuss investment in critical sectors such as energy, healthcare, and vital infrastructure to support Libya’s economic recovery and alleviate the suffering of the Libyan people.

The Forum will focus on the most critical areas where Libya requires investment, specifically infrastructure, energy, healthcare, and the financial sector.

Delegates from across Libya will explore with representatives of British & international businesses shared opportunities for investment as well as ways to improve security, strengthen governance, and revitalise civil society.

“We are very pleased to have helped with organizing this forum, which is an important step towards reinvigorating the Libyan economy. Investment in electricity, water, and healthcare is critical to alleviating the suffering of the Libyan people. After five years of violence and political divisions, the Libyan people deserve better.” The British Ambassador, Peter Millett, said.

He addded that Libya is recovering from the political and economic challenges that have beset the country following the removal of a brutal and longstanding dictatorship.

“This is the first major investment conference since the Government of National Accord was established, and it is aimed to encourage investment in the most vital sectors.” Millett indicated.

According to the British Ambassador, the Libyan delegates are from businesses and organisations from across Libya. The forum will kick off with a plenary session, outlining Libya’s reconstruction and investment priorities. This will be followed by a series of breakout sessions focussing on key sectors and on efforts to strengthen governance, enhance security and revitalise civil society as critical components of Libya’s reconstruction agenda.

For: London to host Libya Reconstruction and Investment Forum