Mercury crosses the Sun in a phenomenal celestial event 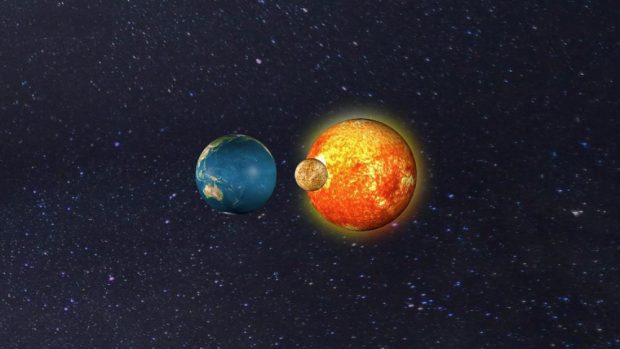 It’s been a decade since the last rare but beautiful sighting of Mercury crossing the sun appeared. Today, the event is happening again.

Mercury’s transit is visible when the little planet crosses between us and our view of the sun. This perspective lets us watch the planet’s progress in real time. It’s a relatively rare sighting (this happens only approximately 13 times a century) that requires that Mercury, Earth, and the sun all line up together.

The happening is more than just a good show. It’s also pretty useful to planetary scientists—though, curiously, the data they’re looking for is often not about Mercury at all. Instead, the slight drop in brightness from the sun blocked out by a planet, like Mercury, moving in front of a star, like our sun, lets researchers get a better view of dim exoplanets.

At 1/285 the size of the sun, Mercury’s shadow during a transit may not seem like it would make a visible difference to the light of the sun, but it’s enough. Kepler scientists attribute at least a thousand planetary discoveries to observing similar drops in the brightness of stars during exoplanet transits.

With a few exceptions (which you can see in the map—sorry, Australia), the transit is visible pretty much everywhere on earth.

For: Mercury crosses the Sun in a phenomenal celestial event