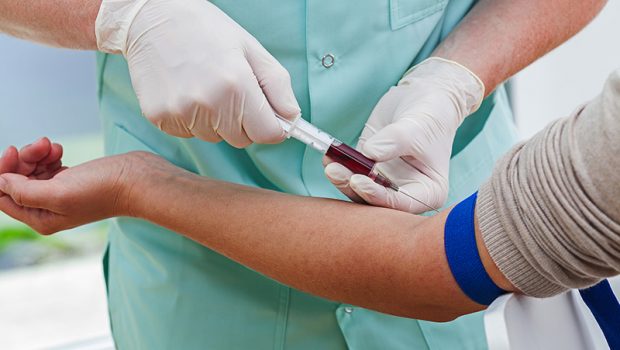 Scientists at King’s College London have developed a blood test that accurately and reliably predicts whether depressed patients will respond to common antidepressants, which could herald a new era of personalised treatment for people with depression.

Guided by this test, patients with blood inflammation above a certain threshold could be directed towards earlier access to more assertive antidepressant strategies, such as a combination of antidepressants, before their condition worsens.

Approximately half of all depressed patients do not respond to first-line antidepressants and a third of patients are resistant to all available pharmacological treatments. Until now, it has been impossible to establish if individual patients will respond to common antidepressants or if they need a more assertive antidepressant treatment plan, which may include a combination of more than one medication.

As a result, patients are treated with a trial-and-error approach whereby one antidepressant is tried after another, often for 12 or more weeks for every type of antidepressant. This can result in long periods of ineffective antidepressant treatment for individuals who may not show an improvement in symptoms anyway.

The study, published today by The International Journal of Neuropsychopharmacology, focused on two biomarkers that measure blood inflammation, as previous studies have already shown that elevated levels of inflammation are associated with poor response to antidepressants.

They measured the quantity of two biomarkers – of Macrophage Migration Inhibitory Factor (MIF) and interleukin (IL)-1β- in two independent clinical samples of depressed patients, before or after they took a range of commonly prescribed antidepressants.

The researchers found that blood test results above a specified threshold level could precisely and reliably predict the probability of individuals responding to the treatments. Patients with levels of MIF and IL-1βabove the thresholds showed a 100 per cent chance of not responding to conventional, commonly prescribed antidepressants. Those with inflammation below the suggested threshold could be expected to respond to first-line antidepressants, according to the study authors.

The two biomarkers examined in the study are both thought to be important in predicting how people with depression respond to antidepressants, as they are involved in several brain mechanisms relevant to depression. These include the birth of new brain cells and connections between them, as well as the death of brain cells through a process called ‘oxidative stress.’Oxidative stress occurs when the body both overproduces and then struggles to remove molecules called ‘free radicals.’These free radicals break down brain connections and disrupt the brain’s chemical signalling, which in turn can lead to the development of depressive symptoms by reducing the brain’s protective mechanisms.

Professor Carmine Pariante from the Institute of Psychiatry, Psychology & Neuroscience (IoPPN) at King’s College London and senior author of the study, said: ‘The identification of biomarkers that predict treatment response is crucial in reducing the social and economic burden of depression, and improving quality of life of patients.

‘This study provides a clinically-suitable approach for personalising antidepressant therapy – patients who have blood inflammation above a certain threshold could be directed toward earlier access to more assertive antidepressant strategies, including the addition of other antidepressants or anti-inflammatory drugs.’

Dr Annamaria Cattaneo, first author from the IoPPN at King’s College London, said: ‘This is the first time a blood test has been used to precisely predict, in two independent clinical groups of depressed patients, the response to a range of commonly prescribed antidepressants.

‘These results also confirm and extend the mounting evidence that high levels of inflammation induce a more severe form of depression, which is less likely to respond to common antidepressants.’

Dr Cattaneo added: ‘This study moves us a step closer to providing personalised antidepressant treatment at the earliest signs of depression.

‘It is really crucial now to carry out a clinical study comparing the current clinical practice in antidepressant prescription, based on trial-and-error, with our novel approach of ‘personalised psychiatry’, where the antidepressant treatment plan is guided by the blood test.’