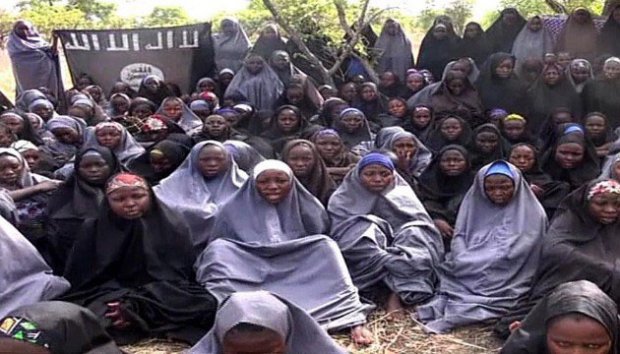 The Nigerian Islamist group Boko Haram has released a video showing some of the schoolgirls they abducted from the northern town of Chibok.

Some 50 girls are shown with a gunman who demands the release of fighters in return for the girls, and says some girls died in air strikes. The government says it is in touch with the militants behind the video. The group is said to be holding more than 200 of the 276 final-year girls it seized from a school in April 2014.

Non-Muslims were forcibly converted to Islam, and it is feared that many of the schoolgirls have been sexually abused and forced into “marriage” by their captors.

A leading member of the Bring Back Our Girls movement which campaigns for their release told BBC News after watching the video that she was terrified by what she had seen.

“Everybody should be disturbed by the conditions of the girls,” Aisha Yesufu said.

The video begins with a shot of a masked man, carrying a gun, speaking to the camera. He says that some of the girls have been wounded and have life-threatening injuries, and that 40 have been “married”.

Speaking in the Hausa language, the gunman says the girls on display will “never” be returned if the government does not release Boko Haram fighters who have been “in detention for ages”.

The video concludes with footage of bodies, said to be the victims of air strikes, lying on the ground at another location.

The militant also carries out a staged interview with one of the captives, who calls herself Maida Yakubu, in which she asks parents to appeal to the government.

Maida’s mother, Esther, is one of several parents of Chibok girls who recently published open letters to their daughters detailing the pain they feel at their children’s absence and their hopes for the future.

Another girl among those standing in the background can be seen with a baby. Some of the girls can be seen weeping as Maida speaks.