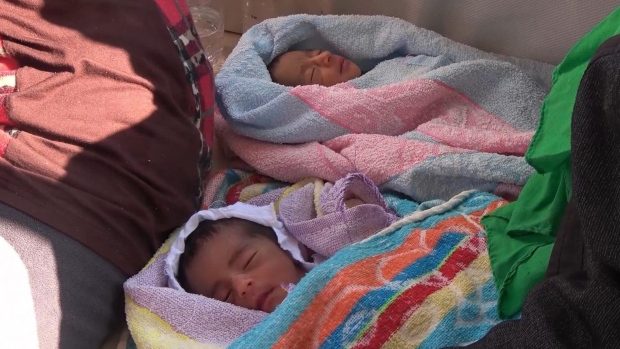 Two Eritrean twin baby boys were recovering well at a hospital in Palermo on Wednesday, a week after they were born prematurely in Libya and then — at only 5 days old — put on a cramped boat headed to Europe’s shores.

The twin boys were lucky survivors of a dangerous voyage across the Mediterranean that has claimed more than 3,000 lives to date this year, a journey that many continue to take in a desperate effort for a better life.

The tiny infants, bundled in towels and with a white bonnet covering the head of one, were rescued off the Libyan coast by non-governmental groups on Monday. They were among thousands of migrants, mostly Eritreans and Somalis, who piled into boats in Libya before dawn and traveled for several hours before being picked up.

The babies were in an open wooden boat carrying about 650 people who were exposed to the sun and wind and who had no food or water, said Nicholas Papachrysostomou, the field coordinator of rescue operators on Dignity I, a Doctors Without Borders ship that played a leading role in the rescue.

The medical team on board the ship determined that the baby needed immediate medical attention and arranged to have both twins and their mother evacuated. They were first taken by boat to the island of Lampedusa, where they were stabilized, and then airlifted to a hospital in Palermo, where the boy was admitted to the neonatal ward.

“Both of them are doing well. The vulnerable one is stable. The developments of the story justified the decision” for the emergency medical treatment, Papachrysostomou said.

The mother, Merhawit Tesfamamrim, a 26-year-old from Asmara, the capital of Eritrea, was also recovering in the Palermo hospital, and appeared to be in good shape.

The U.N. refugee agency UNHCR said that 3,167 people have either died or gone missing crossing the Mediterranean Sea into Europe from the Middle East and Africa to date this year in unseaworthy boats and dinghies.

For: Newborn twins recovered in Italian hospital after being rescued from boat in the Mediterranean