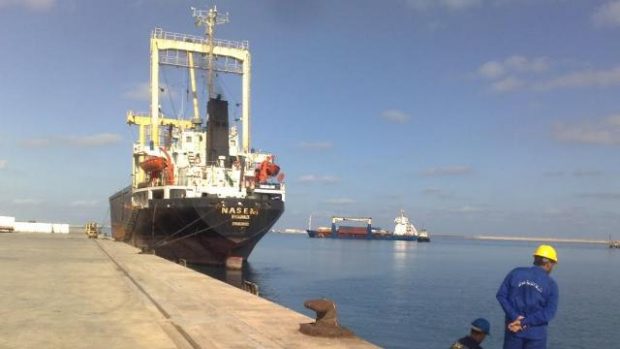 A tanker returned to Libya’s third-biggest oil port to load a cargo a day after clashes between rival armed forces forced it to sail away to safety, in what would be the first overseas crude shipment from the terminal of Ras Lanuf since 2014.

The vessel Seadelta was to resume loading 781,000 barrels of oil for shipment to Italy within four hours, Nasser Delaab, petroleum operations inspector at Harouge Oil Operations, said Monday by phone. The ship would be full 18 hours after that, he said. Another tanker, the Syra, would arrive in Ras Lanuf later on Monday to ship 600,000 barrels of crude to Italy, he said.

The Seadelta halted loading amid fighting that complicated efforts to end a five-year conflict that has slashed Libya’s oil exports. Forces loyal to eastern-based military commander Khalifa Haftar repulsed a local Petroleum Facilities Guard unit that tried on Sunday to seize control of Ras Lanuf and the country’s largest oil port of Es Sider in east Libya, Mohammad Al-Azoumi, spokesman for a battalion under Haftar’s command, said by phone. Five petroleum guards were killed during the clashes, he said

Libya, if it succeeds in shipping the Seadelta cargo from Ras Lanuf, will be selling into an oversupplied market in which crude is trading at about half its 2014 levels. The country holds Africa’s largest oil reserves and pumped 1.6 million barrels of crude a day before Qaddafi’s ouster. Production has tumbled since then to 260,000 barrels a day in August, according to data compiled by Bloomberg, and Libya now ranks as the second-smallest producer in the Organization of Petroleum Exporting Countries, after Gabon.

Harouge Oil pumped about 100,000 barrels a day through the end of 2014 but halted operations due to fighting in the country, Delaab said. The company has production rights to at least five oil fields around Ras Lanuf, according to its website.