Powerful earthquake hits northeastern Japan as a tsunami is depicted 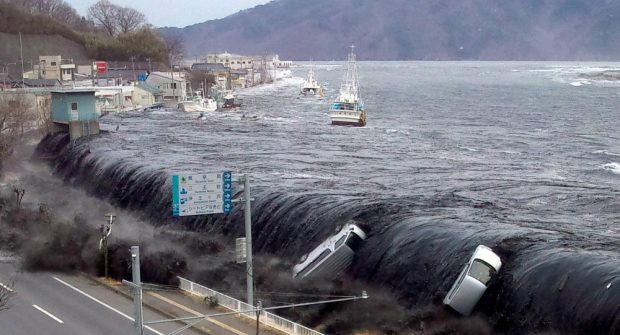 Japan Times – A powerful earthquake struck northeastern Japan on Tuesday morning, briefly disrupting nuclear fuel cooling functions at the Fukushima No. 2 power plant and generating tsunami of over 1 meter in the region that was devastated by the Great East Japan Earthquake, tsunami and nuclear disaster five years ago.

The 5:59 a.m. quake with a preliminary magnitude of 7.4 is believed to be an aftershock of the March 2011 mega-quake, the Meteorological Agency said.

It was the first quake with a magnitude of 7 or bigger to hit Japan since July 2014. The agency warned that there may be similar-scale quakes for around a week.

A tsunami measuring 1.4 meters high was observed at Sendai port in Miyagi Prefecture and a wave of about 1 meter reached the coast near the Fukushima No. 1 nuclear plant that was crippled by the 2011 quake-tsunami disaster.

Authorities instructed residents in coastal areas to evacuate to higher ground and hundreds of schools canceled classes. Over 3,000 people fled to evacuation centers in Fukushima Prefecture.

“The sound of sirens brought back memories of the huge earthquake (in 2011),” said Tomomi Nagakubo, 48, who drove her car to an evacuation center in Ibaraki Prefecture with her 13-year-old son.

According to the Fire and Disaster Management Agency, a total of 17 people in Fukushima, Chiba, Tokyo and Miyagi prefectures were injured as a result of the quake. They included an 82-year-old woman in Chiba who fell down some stairs in her home and fractured her hip. In Fukushima, three people were injured, two of whom were elderly women who tripped and suffered broken bones.

The cooling system for the spent fuel pool in the No. 3 reactor building at the Fukushima No. 2 power plant stopped working but was restarted about 100 minutes later, according to operator Tokyo Electric Power Company Holdings Inc.

For: Powerful earthquake hits northeastern Japan as a tsunami is depicted