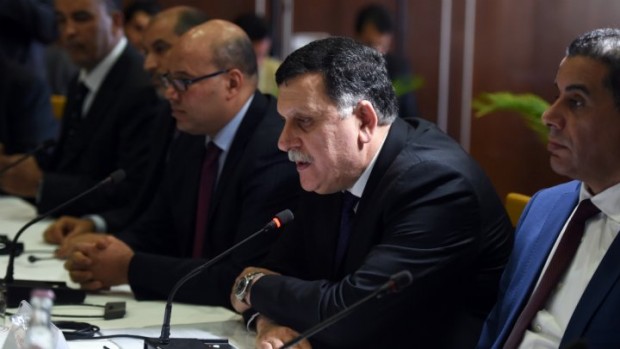 Libya’s U.N.-backed unity government has accused authorities in Tripoli of closing down the capital’s airspace to prevent it from traveling from Tunisia to start work.

The unity government’s Presidential Council released a statement on Monday after two days of swirling rumors that it was on its way to Libya and several flight stoppages at Tripoli’s Mitiga airport.

The Presidential Council said a minority led by the Tripoli-based prime minister was “terrorizing the safe population of Tripoli and obstructing the unity government by closing the airspace”.

Flights were suspended at Mitiga Airport for periods on both Sunday and Monday. A civil aviation official said this was for “safety and security reasons”, though a security source at Mitiga said on Sunday that an armed group had closed the airspace to block a flight intended to bring in the unity government’s Prime Minister Fayez Seraj.

The unity government was designed to bridge divisions and end political and security chaos in the North African country, which has had rival pairs of parliaments and governments since 2014.

But it has faced resistance both in the east, where it has so far failed to secure a vote of approval from the internationally recognized parliament, and in Tripoli, where the prime minister of the self-declared government has warned the unity government against moving.

There have also been fresh clashes between armed groups in and around the capital in recent days, though it is not clear whether these have been linked directly to the political process.

Despite the continuing unrest in Tripoli, Seraj said earlier this month that a security plan had been sealed and the government would move imminently.

The Presidential Council’s statement on Monday said: “Security arrangements have been completed and the council has begun to move to Tripoli to start its mission.”

No one from the council was immediately available to confirm whether its members had yet attempted to fly to Tripoli.

Last week, the U.N. envoy said he had been prevented from flying to Tripoli for a visit to “pave the way” for the unity government.

Western powers recently recognized the unity government as the sole legitimate government in Libya. They argue it offers the best hope of countering Islamic State militants in the country, and stemming migrant boat crossings toward Europe.