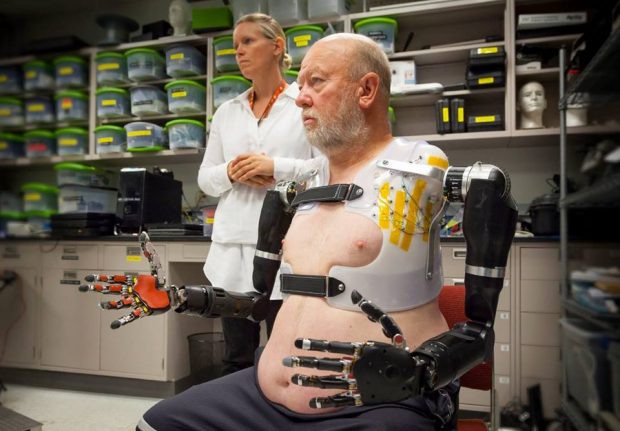 Researchers at Purdue have been working on technology that may help pave the way for the future of artificial limbs.

“The point of these research labs is to discover new technologies that we can translate into the real world and make the world a better place,” Purdue Center for Implantable Devices director Pedro Irazoqui said. Bionic limbs are artificial limbs which use signals sent from the brain, nerves and muscles to operate as the user wishes — just like real limbs work.

Irazoqui says the only problem is the signals have been constrained because of the current technology. “Acquiring those electrical signals from the brain or the nerve for a long period of time, reliably, is a very hard thing to do,” Irazoqui said. “The trick is how do you get that robotic arm to do what you want it to do with your mind.” Bionic limbs are nothing new, but Irazoqui says the technology associated with them has been difficult to establish for as long as they’ve been used.

Researchers at the Rehabilitation Center of Chicago found a way to make muscle control of limbs easier, and in 2013 the center started a company called Coapt.The first method the company used had the electrode, which records signals from the muscle, sitting on top of the skin. The placement of the electrode on top of the skin was ultimately found to make it difficult to accurately record the signals.

The company then found out researchers at Purdue had been working on internal electrodes designed to be placed inside the muscle — making it easier to record. After working with Purdue, the company even bought the patent to the technology and is using it as an add-on to their pre-existing technology. Coapt CEO Blair Lock said the technology will make a big impact.

“This technology it’s really a revolutionary way to get the best results from our body,” Lock said. The internal electrodes are fairly small and can be injected into the muscle via anesthetic.

As far as the amount of electrodes injected into the amputee, that depends on how many different movements they are looking to be able to do. As far as those working on the technology, it makes them happy knowing it could change lives.

“It’s something that I feel like we’re really good at doing in this lab, taking technologies and making it not just a neat paper or a nice poster somewhere, but actually a technology that can be translated into an actual medical advance, it’s really cool to see that happening,” Purdue student Kyle Thackston saidNeither Coapt or the Center for Implantable Devices actually produces the limbs themselves, just the technology for them.

For: Revolutionary artificial limbs using signals from the brain