Samsung Galaxy Note 7 banned by most airliners around the world 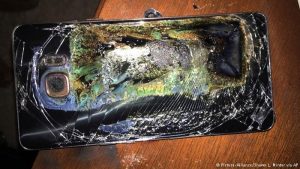 An airline flight ban on Samsung’s Galaxy Note 7 is spreading fast after reports some phones have caught fire.

Carriers in Australia, Asia and Europe put the phone on a prohibited list over the weekend, which comes after the US banned the device last week.

Carriers flying to the US inevitably had to follow suit, but the bans are spreading worldwide.

Qantas and its discount carrier Jetstar said in a statement: “The ban applies to devices being carried onto the aircraft, in carry-on baggage as well as check-in luggage.”

Virgin Australia issued a similar announcement, but added that passengers were “strongly advised” not to bring the Note 7 phone to airports.

Air Berlin has banned the phones with immediate effect. Larger German rival Lufthansa has a ban on flights to the US, but is reportedly planning to impose the restriction across all flights soon.

Singapore Airlines said on its Facebook page that “the Galaxy Note 7 smartphone will be prohibited from being brought on board all our flights in person, in carry-on baggage or checked-in baggage with effect from 16 October”.

Samsung recalled around 2.5 million phones in September after complaints of exploding batteries.

While it later insisted that all replaced devices were safe, there were reports that those phones were catching fire too.

The company then said it would stop Galaxy Note 7 production.

For: Samsung Galaxy Note 7 banned by most airliners around the world