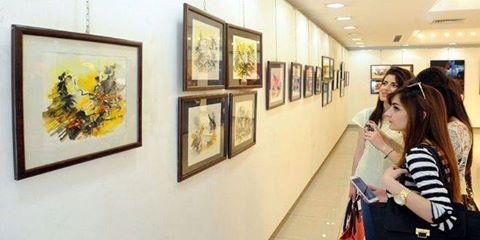 Artist, Abu Turabeh, who selected the phrase “Souria Ya Habibati” (Syria My Love) as the title of his exhibition, mainly depended on the engraving technique. He used grey, white and black colors as background for his paintings.

In a statement to SANA Cultural Bulletin, Abu Turabeh said that the Syrian crisis has affected all aspects of Syrian life, including arts, and as an artist I attempted to depict the repercussions of the unjust war waged on my country from my own perspective.

He said that the spread of visual culture nowadays has contributed to the growing interest in color as the main element to express the artist’s feelings and ideas, adding that his paintings are a combination of color drawing and engraving techniques.

For his part, Head of the Syrian Plastic Artists Union, Ehssan al-A’r, underlined Abu Turabeh’s success in utilizing colors to document the current crisis and its repercussions on all levels, indicating to the diversity of painting techniques such acrylics, pastels and oil paints which Abu Turabeh used in his artworks.