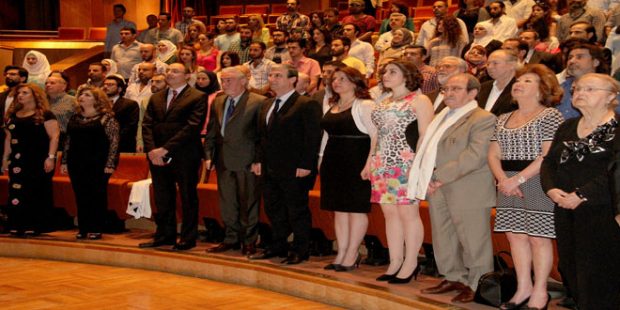 The Youth Cinema and Short Films Festival concluded its activities on Tuesday at the Drama Hall of Dar al-Assad for Culture and Arts (Opera House) with presenting awards to the winners and honoring a number of movie directors.

“Low Battery” film, directed and written by Muthanna al-Khous, won the Gold Award in the festival’s contest. A monetary reward of SYP 300, 000 was granted to al-Khous by the well-known movie director Najdat Ismael Anzour, the jury’s head.

Actress Salma al-Masri presented the Silver Award to director Hossam Sharabati for his film “Sulaima” along with a financial amount of SYP 250, 000.

Fadi Elias received the Bronze Award and a SYP 200,000 reward, presented to him by director and critic Fadel Kawakebi for his film “Moan”.

The festivals’ Best Screenplay Award went to the movie “A Date with the Rain” by director Shadi Shaheen. The award was presented by screenwriter Hassan Sami Yousef.

Actress Nadin Tahsin Beik presented the Jury Award to Ali al-Maghout,for his film “The Start”. Al-Maghout, who wrote and directed the film, also was offered the opportunity to direct a professional movie produced by the General Establishment for Cinema.

The film “Ward”, which is directed and written by Rahaf Khaddour, got a special mention by actress Rana Shmeis.

The festival’s director Mohammad al-Ahmad, who is General Director of the Establishment for Cinema, said he hoped the festival has achieved its goal in terms of providing an opportunity for amateur filmmakers to express themselves in cinema and introducing new cinematic worlds.

More than thirty short movies, most of which were filmed during the past years of the crisis in the country and featured its aspects on the Syrian people’s lives, were displayed in the course of the 6-day festival.