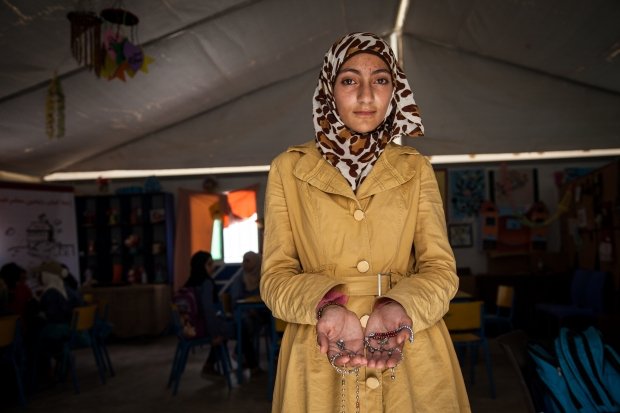 A North Texas jewelry store worker left a local woman stunned who was trying to sell an important, gold necklace given to her by her mother.

Noah, who does not want his last name used, denied the mother of two children the sale.

“It seemed like she was sad and there was tears in her eyes,” said Noah.

He said the woman told him she needed money for bills and was broke.

“I let her tell me how much she wanted to sell it and I gave her exactly what money she wanted,” said Noah.

The jewelry store employee not only dug into his own pockets, but after handing over a significant amount of money he gave back the necklace.

The moment was captured on security cameras.

The woman appears astonished on the video and begins to embrace Noah, wiping tears from her eyes.

“If I had her number I would call her back and see if she needed more money or more help, I’ll do it for her,” said Noah.

What people not might realize is that Noah is a Syrian refugee seeking asylum with his family. They escaped their civil war embattled homeland two years ago.

Noah said he shared the video with one person back home and had no idea that person would upload the now viral video.

“I feel better and that’s enough. Better than a lot of money,” said Noah.

Noah said he was just trying to help out someone who needed a hand. He feels it is that kind of generosity from others that has helped get his family to America alive.

For: Syrian jewelry store worker helps woman out with money to save her a dear necklace