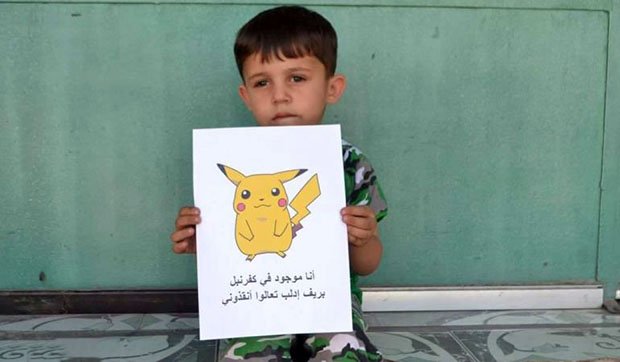 As his home city of Aleppo continued to wane at the hands of the five-year-civil war, Khaled Akil wondered what it would be like to hunt for the Pokémon characters amid the rubble in Syria.

In the Syrian artist’s latest project, a series of photos from AFP posted to his website show the catchable monsters amid scenes of despair.

The project is titled, “Pokémon Go In Syria – Part 1”. The result is eerie.

The animated figures watch on in the aftermath of a bomb blast; stare into the camera as a child walks between crumbled buildings; creep out from a burst pipe as young boys swim in dirty water and squat atop a tank with fighters from the Islamic State of Iraq and the Levant (ISIL, also known as ISIS) group.

“Being an avid follower of news and global social trends, I found this unnerving contradiction between the playfulness of the Pokémon world and the danger which Syrians and Syrian children live through every day,” he told Al Jazeera.

Akil is a Syrian fine-art photographer and mixed media artist who was born in Aleppo [Khaled Akil/AFP]
“I wondered what it would be like to hunt for a Pokémon character among the rubble in Syria, and how a virtual game attracts more attention than the atrocities committed daily in real-life Syria.”

The artwork, he added, is not meant to point fingers but rather highlight the crisis.

“This project is not to blame people for not paying attention for Syria at all, it is just a spotlight on what is happening there.”

For: Syrian kids hold Pokemon pictures in hands amid rubble to show the world they matter more