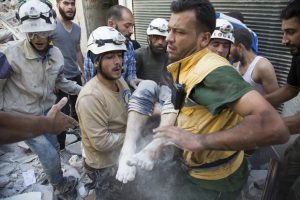 The White Helmets were recognised for “outstanding bravery, compassion and humanitarian engagement in rescuing civilians”.

The group has almost 3,000 volunteers, and claims to have saved 60,000 lives in the Syrian conflict.

The three other recipients sharing the prize, dubbed the “alternative Nobel Prize”, are Mozn Hassan, an Egyptian feminist; Svetlana Gannushkina, a Russian human rights activist; and Cumhuriyet, a Turkish newspaper.

The White Helmets are internationally recognised for their rescue efforts, and have been nominated for the “real” Nobel Peace Prize, which will be announced in October.

Syrian President Bashar al-Assad, however, downplayed the importance of the organisation’s work.

In an interview with the APTN news agency, Mr Assad asked: “What did they achieve in Syria?

“How unpoliticised is the Nobel Prize? That’s the other question,” he said.

“I would only give a prize to whoever worked for the peace in Syria first of all by stopping the terrorists from blowing war on Syria, only.”

In a statement announcing the laureates, the award’s organisers said the Syria Civil Defence’s “deep commitment to humanitarian action” had “drawn international attention to the plight of Syria’s citizens and the devastation caused by barrel bombs”.

Speaking about all four recipients, executive director of the prize, Ole von Uexkull, said: “We do not only celebrate their courage, compassion and commitment; we also celebrate the success of their work, against all odds, and the real difference they are making in the world today.”

In response to the award, the group tweeted that it was “humbled” and “proud”.

The White Helmets are also the subject of a documentary film released on streaming service Netflix earlier this month.