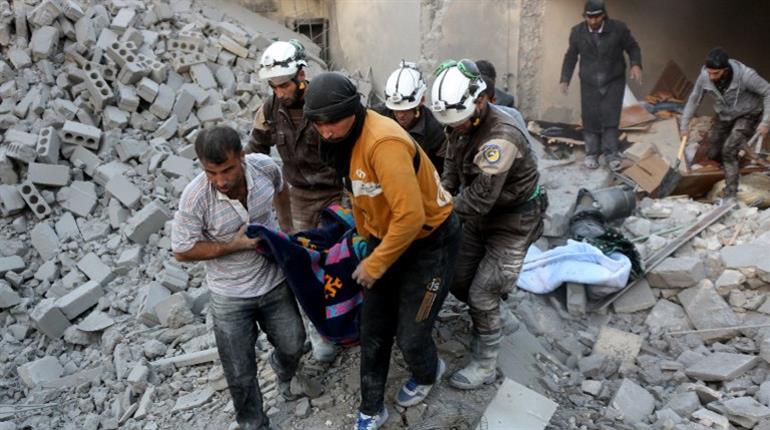 DPA – The leader of a voluntary Syrian aid group that assists civilian victims of the country’s civil war was honored Friday with an award often called “the Alternative Nobel prize”.

“Our greatest contribution has not been to save 73,000 lives but to bring hope where previously there was none,” said Raed al-Saleh, head of the White Helmets on accepting the Right Livelihood Award.

He recounted how the volunteers began operating in March 2013 when Syrian airstrikes were targeting civilians in the city of Aleppo, including deploying barrel bombs.

“The localized effect of a barrel bomb is the same as an earthquake measuring 8 on the Richter scale,” he said.

The volunteers – including carpenters, electricians and bakers – now number 3,000 and have pledged to “save lives regardless of political, religious or sectarian affiliation,” he said.

But their efforts have taken a toll.

“148 of our volunteers have been killed and over 450 have been seriously injured,” he said, saying the award also recognized “all the Syrian civilians that daily face indiscriminate bomb attacks and that live in fear.”

Looking ahead, al-Saleh said that when the fighting ends, “the greatest challenge will not be to rebuild the roads between communities but to rebuild the trust between them. Trust has been destroyed inside Syria.”

The recipients receive 750,000 kronor (87,000 dollars) each. The award was set up in 1980 to honour individuals and organizations “offering visionary and exemplary solutions to the root causes of global problems.”

In all, 125 nominations from 50 countries were considered this year.

The recipients were Sunday to fly to Berlin for meetings with German parliamentarians before travelling to Geneva for a meeting with the United Nations High Commissioner for Human Rights, Zeid Ra’ad al-Hussein.

The award ceremony was held for the first time at the Vasa Museum on the Stockholm waterfront, dedicated to a 17th century warship that sank on her maiden voyage.

Prior award winners include US whistleblower Edward Snowden and former editor of British daily The Guardian Alan Rusbridger, for their work exposing data-collection programmes used by the US National Security Agency (NSA), and Denis Mukwege, a doctor from the Democratic Republic of Congo for helping treat thousands of mass rape victims.