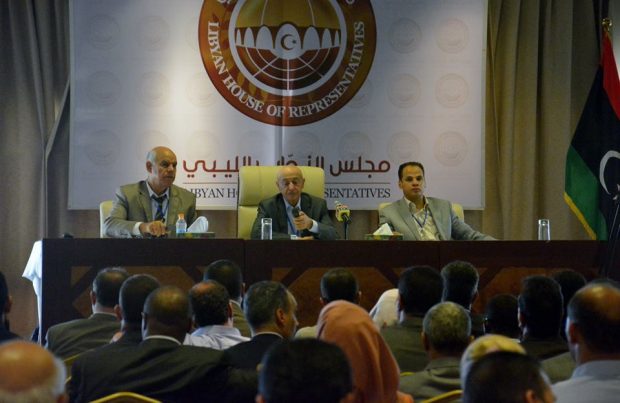 Libya’s eastern House of Representatives (HoR) voted on Tuesday to withdraw its support for a UN peace deal and Government of National Accord (GNA).

The decision led to an escalation in the fractured country’s division as many HoR members threatened Wednesday to split from Tobruk HQ and form a new body with a new speaker to replace Agilah Saleh.

Abdullah Ablaihig, spokesman for the Tobruk-based House of Representatives, said the body voted to annul its previous acceptance of a presidential council and the UN-backed government currently led by Prime Minister Fayez Al-Serraj in Tripoli.

The BDB, which oppose the HoR, said they intended to take the eastern city of Benghazi and drive Khalifa Hafter’s forces from the area.

“The GNA unity government is not legitimate any more, as well as its presidential council and anything to do with this entity,” Ablaihig said, urging the international community to lift an embargo on weapons sales to the “Libyan Army” under Hafter.

His forces have deployed more troops in preparation of a counterattack to drive out the BDB.

Later in the day, the Tripoli government’s Petroleum Facilities Guard said that the oil terminals had been abandoned by the Benghazi Defense Brigades and that its forces were moving to occupy the facilities in a handover deal made by the BDB.

“Now the forces will be formed and deploy to the oil terminals momentarily.” He added.

The Italian Embassy tweeted its support for the move, describing the deployment as “a step in the right direction” that should end the fighting.

Troops under the command of Hafter who were driven out of the oil facilities said they had redeployed to the east around the town of Brega and had been fighting skirmishes in recent days as they attempted to reconnoiter the opposing lines under air support.

An official at nearby Ajdabiya hospital said seven more of Hafter’s troops were killed in fighting near Ras Lanuf on Tuesday, bringing that side’s total losses to 39 killed over the past four days.

The views expressed in Op-Ed pieces are those of the author and do not purport to reflect the opinions or views of Libyan Express.
How to submit an Op-Ed: Libyan Express accepts opinion articles on a wide range of topics. Submissions may be sent to oped@libyanexpress.com. Please include ‘Op-Ed’ in the subject line.
HoRLibyaLibyan Political Agreementoil ports
Share
Submit a Correction
Sign up for our Newsletter.

For: Tobruk HoR breaks up with Libyan Political Agreement after losing grip on oil ports