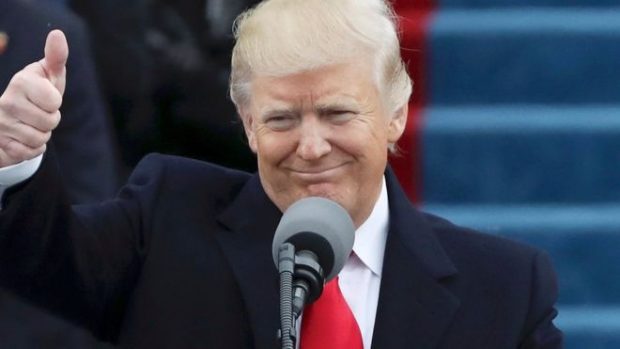 At its peak, a record 8.7Tbps of live video was streamed, according to content delivery network Akamai Technologies.
The previous record of 7.5Tbps was set during US election day coverage on 8 November 2016.

The figures reflect the growing popularity of online streaming.
In the US, 31 million people watched Mr Trump’s inauguration on television, compared with 38 million who watched Barack Obama becoming president in 2009.

However, video traffic of Mr Obama’s inauguration reached a peak of just 1.1Tbps the same year. Akamai Technologies also analysed other recent events such as the Euro 2016 football tournament, which recorded a peak of 7.3Tbps, and the 2016 Rio Olympics women’s team gymnastics final, which hit 4.5Tbps.

The rise of high definition video streaming also demands more internet traffic, which may have contributed to the increased bitrates shown in Akamai’s figures.

Rob Owers, head of news partnerships at Twitter, told the BBC that the platform had seen an overall increase in live video views.
“The demand for immediacy and proliferation of mobile products means we’re more connected than ever, and live streaming is definitely at the heart of this,” he said.

“People get used to the fact that wherever they are, there’s no reason they should miss out on breaking news or events.”