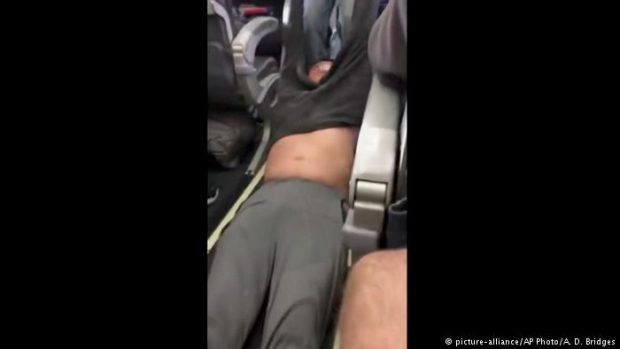 United Airlines (UAL.N) sparked outrage on Monday for the treatment of a passenger who was physically dragged off a plane the airline had overbooked, and one of the security officers involved in the incident was placed on leave pending an investigation, Reuters reported.

Videos posted online by other passengers showed a man screaming as officers yanked him from his seat on United Flight 3411 before it departed from Chicago O’Hare International Airport to Louisville, Kentucky, on Sunday, Reuters added.

The man, who appeared to be Asian, was seen being dragged down the aisle on his back by his hands, body limp, bleeding from the mouth, glasses askew and shirt pulled up above his navel. The videos sparked outrage on social media, the second time in less than a month that United was criticized for its treatment of passengers, according to Reuters.

In a letter circulated to employees and seen by Reuters, United Chief Executive Officer Oscar Munoz did not apologize for the way the passenger was handled, writing that the passenger had “defied” security officers, Reuters explained.

Reuters also added that Munoz said there are lessons the company can learn from this situation, though he impressed that he “emphatically” stands behind his employees.

The Chicago Department of Aviation said in a statement that one of the officers did not follow protocol and added that he had been placed on leave pending a review for actions not condoned by the department, Reuters elaborated.

The U.S. Department of Transportation (DOT) said it was reviewing whether United complied with overbook rules that require airlines to set guidelines on how passengers are denied boarding if they do not volunteer to give up their seats, Reuters indicated.

“While it is legal for airlines to involuntarily bump passengers from an oversold flight when there are not enough volunteers, it is the airline’s responsibility to determine its own fair boarding priorities,” a DOT spokesperson said in a statement reported by Reuters.